Scattering of low temperatures at or just below freezing in a few of the usual Interior low spots Saturday morning. Does not happen every July but not especially unusual. #akwx @akswingley @Climatologist49 pic.twitter.com/UwwIhXg4Z4

The chart below shows the hourly temperature trace, with the minimum occurring at 3am this morning and 1am yesterday (AKST). 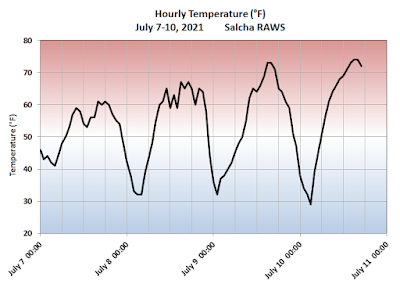 Chicken also saw a freeze this morning: 31°F.  Early last summer I commented that Chicken hadn't seen a hard freeze (28°F or lower) in the height of summer for several years, but then it happened less than a month after my post last year: 27°F on July 3, 2020.

The Chalkyitsik RAWS (31°F yesterday and today) was also colder last July: 28°F on July 23.  None of these cold spots are reliably frost-free at any time of the year.