With snow in the forecast for Fairbanks today, and probably more than just a dusting according to the GFS model, I wondered about the seasonal frequency of accumulating snow as opposed to plain rain.

This is a straightforward question to answer with the daily climate history from Fairbanks.  The chart below shows (with the blue line) the frequency with which a measurable snow accumulation was reported when daily precipitation was measurable, i.e. 0.01" or more.  The red line indicates the slightly different climatology for precipitation events of 0.1" or more, and the black line shows the difference between the two. 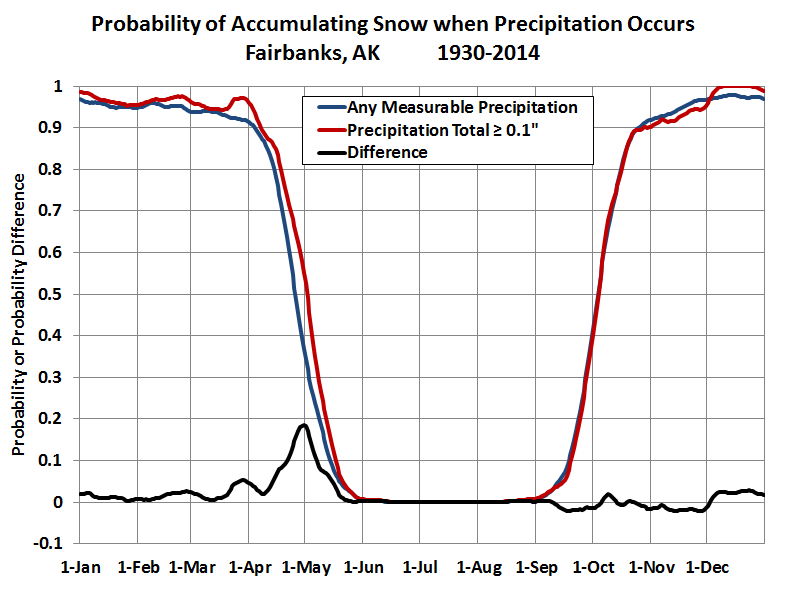 The transition from mostly accumulating snow events to all-rain events gets under way in April, but doesn't really pick up until the second half of the month; so as of today, there is still an 85% chance that a precipitation event will include measurable snowfall.  The probability doesn't drop to 50% until April 26.

The snow-rain transition climatology in Fairbanks is a nice illustration of the brevity of the spring and autumn seasons in the Alaskan interior; the all-rain probability changes from 10 to 90% or vice versa in only 40 days in both spring and fall.

Posted by Richard James at 4:43 AM