Following hard on the heels of the remarkable episode two weeks ago, the last few days have again seen extremely unusual warmth surge northward across western Alaska and the North Slope.  Freezing rain and even plain (above-freezing) rain was observed widely, leading to loss of snow cover and significant ice accretion in places.

Heavy ice accretion on willow branches near Nome Friday afternoon from nearly half an inch (12mm) of freezing rain. Very bad for this tundra ecosystem as this much ice may "seal" vegetation near the ground until May. Photo credit: G. Sheffield & shared with permssion. #akwx pic.twitter.com/wM2j1Dnbrs

From the perspective of the long-term climate record, most remarkable of all was Utqiaġvik's 40°F yesterday morning on strong southerly winds.  This temperature was measured by both the airport ASOS and the CRN site outside town, and it's the highest temperature ever recorded in winter in Utqiaġvik.  Continuous climate observations have been made there since 1921.  Here's a graphic (click to enlarge): 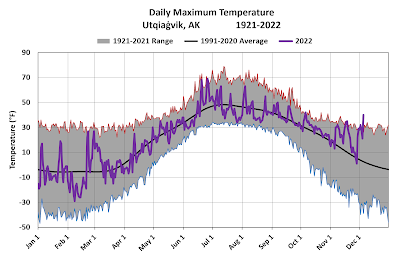 There will be more to say about the rain and freezing rain when I've had a chance to look through the observations more carefully.  For now, it suffices to say that rain has occurred at most or all of the automated sites across northwestern Alaska and North Slope, and even as far east as Toolik.

The excessive high-latitude warmth hasn't been confined to Alaska: it's been raining in Greenland too.

Here's part of the reason why: the Arctic Oscillation has turned sharply negative, which means that MSLP is above-normal in the Arctic, leading to cold in the mid-latitudes and warmth up north.  But of course that doesn't explain the new all-time temperature record; for that, we might suspect that the cause lies in the widespread unusual warmth of the North Pacific.  I suggested as much back in October: "The very warm ocean (relative to normal) ... will certainly boost warmth for Alaska whenever the flow comes from the southwest this winter." 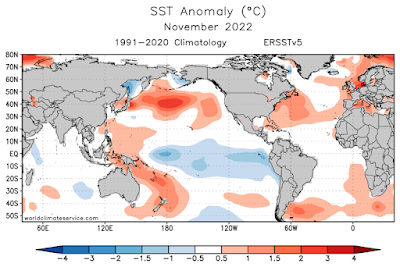 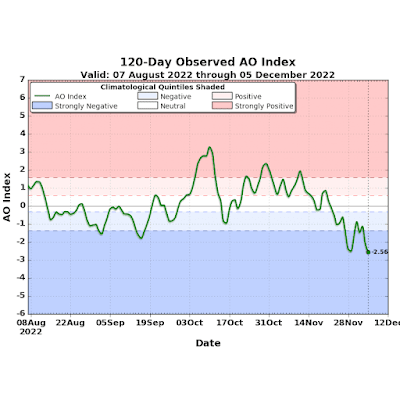 Posted by Richard James at 5:12 PM No comments:

Some readers will already be aware, but for those who aren't: Rick Thoman has started a Substack newsletter/blog focused on Alaska and Arctic climate:

There's a lot to talk about these days in Arctic weather and climate, and Rick (who started the Deep Cold blog) is a preeminent expert, so be sure to sign up for the subscription feature.

Thermometers have registered a sharp drop in the past few days for much of Alaska, with the first -40° showing up on Monday evening at Arctic Village.  The temperature subsequently dropped to -45°F, but the cold snap didn't last long.

Chicken also saw -40° this week, which is right on schedule for the time of year.  In the Fairbanks area, UAF's Smith Lake site reached -30°F.

On the other side of the pendulum, the North Slope has been extremely warm again, with Utqiavik reaching +29°F yesterday - very close to record warmth for the time of year.

The briefly sharp cold spell for interior areas has finally brought freeze-up to Dawson over in the Yukon Territory, judging from the webcam.  Here's a video showing today's scene, courtesy of http://dawson.meteomac.com/

The Tanana River at Nenana appears to still have open water, but not much: 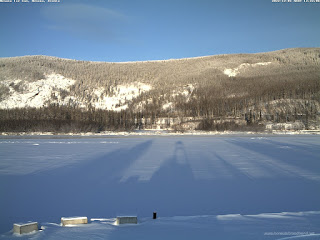 Email ThisBlogThis!Share to TwitterShare to FacebookShare to Pinterest
Labels: Freeze-Up

Happy Thanksgiving to US readers.  It was a warm one in Fairbanks: about 15°F above normal for the date, and that makes it 4 out of the last 5 years that the holiday has been uncharacteristically mild.  But last year was different, with temperatures more typical of mid-January.

Here's a chart of the daily temperature range on Thanksgiving Day since 1930 in Fairbanks.  There are huge variations from year to year, of course, but somewhat less so in recent decades, as nearly all the really cold Thanksgivings (daily mean temperature below -20°F) were pre-1970.  (1994 was a notable exception, however.) 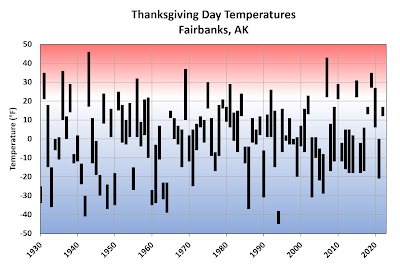 As for snowfall, it's interesting to note that even though only 19 of 93 Thanksgivings since 1930 have produced an inch or more of snow (20%), this is beating the odds for the time of year as a whole: only 13% of all November-December days see an inch of snow.  As for a more substantial snowfall of 3", this has been accomplished on Thanksgiving only twice: in 1975 and 1996.

Here are parallel charts for Anchorage and Utqiaġvik.  Interestingly the only Thanksgiving with a temperature above freezing in Utqiaġvik was way back in the volatile 1930s (1931 in this case), although 2017 and 2019 came pretty close (25°F and 27°F respectively). 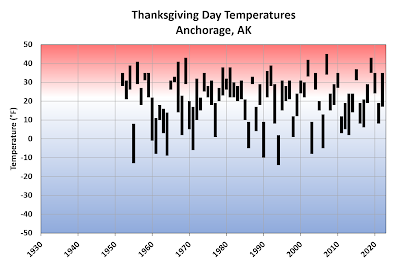 Last week's warmth on the North Slope was exceptionally unusual, one of the most extreme temperature anomalies on record for that part of the world in winter.  Amazingly, the Ivotuk CRN (1900' elevation) reported a daily mean temperature of 43°F on Thursday. 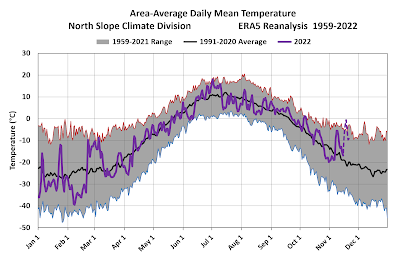 The warmest winter day for the North Slope in the 1959-present ERA5 data was January 29, 1963, which had an enormous ridge over western Alaska - only slightly different from last week's anomaly - see below.

While the North Slope extreme has subsided for now, the state as a whole is very much warmer than normal, as evidenced by UAF's statewide temperature index: the chart below shows the last 14 months or so. 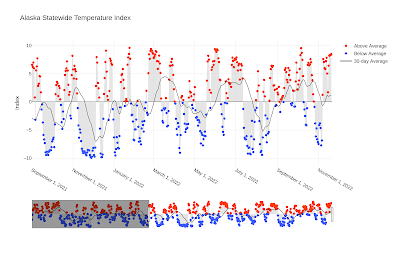 The contrast to last year is becoming more significant by the day, as last year the second half of November was very cold indeed.  The brief cold that we saw back at the end of October and the beginning of November this year now looks very mild and fleeting in comparison.

Neither the Tanana at Nenana nor the Yukon at Dawson are properly frozen over yet: 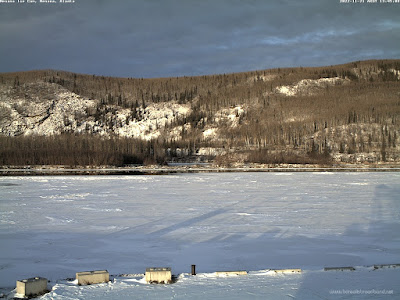 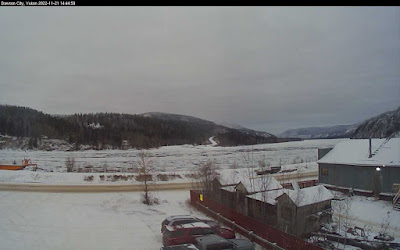 It's a bad situation along the Kuskokwim too, as documented by Bethel Search and Rescue a few days ago in their fifth annual freeze-up survey:

"Summary: For the past several years BSAR has been scheduling our first aerial freeze up survey of the Kuskokwim River on No­vember 18th. Flying the same day each year allows us to look back at previous years for comparison. In 2021, with a record cold November there were well established snow machine trails to nearby villages and even a limited amount of truck traffic on the River by this date. For November 18, 2022 conditions are very different. The lack of cold weather and early snowfall has slowed the freeze up process on the Kuskokwim River and it’s tributaries. THERE IS CURRENTLY TOO MUCH OPEN WATER ON THE KUSKOKWIM RIVER FOR SAFE TRAVEL NO MAIN RIVER TRAVEL RECOMMENDED AT THIS TIME"

This morning's sounding from Yakutat reported a 500mb height of 5820m - higher than has ever been observed in October through March (data back to 1946).  Even in April there's only been one occasion with a stronger ridge, and none in May.  Here's a graphic from my simple monitoring page: 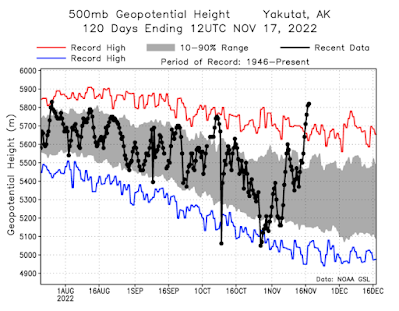 And it's a bona fide thaw for much of the North Slope: temperatures are well above freezing across large areas to the north of the Brooks Range.  The CRN site at Toolik reported 44°F today, and Ivotuk made it up to an incredible 47°F.  The Ivotuk CRN has only been operating since 2014, but this is the warmest observed there between October 5 and May 9.

Posted by Richard James at 4:53 PM No comments:

Records have fallen as upper-air heights have risen over Alaska today, reflecting a really extreme ridge of high pressure aloft (i.e. elevated "heights" of constant pressure surfaces like 500mb).  Here's a view of the mid-atmosphere situation at 3pm today: 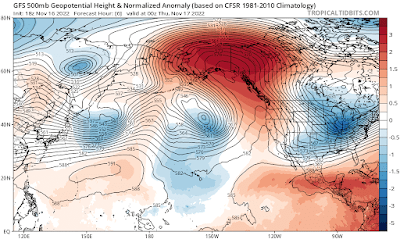 The ridge is centered near Yakutat, and accordingly this afternoon's balloon sounding observed Yakutat's highest 500mb height on record for November, by some margin.  It was very close to the record for winter (November through March) as well; that record is just a smidge higher, from February 1989.

This afternoon's Fairbanks sounding also saw the highest November 500mb height of record, and again it was only just behind the all-time winter record, set in late December 1983.

The most obvious effect of the monster ridge has been to deliver extreme warmth to the coastal periphery of Alaska, from the southwest to the North Slope.  Strong winds lifted temperatures to around the freezing mark across the entire North Slope, and above freezing in areas with additional downslope warming.

Three of the four CRN sites on the North Slope rose above freezing:

It looks like the entire length of the Haul Road from Galbraith Lake northward rose above freezing, and there are even a couple of 40°F readings at USARRAY instruments in coastal ANWR.

Of course it's very warm at higher elevations of the interior as well - Denali's Eielson Visitor Center is currently sitting at 44°F - but the strong inversion has kept valley-level temperatures lower, as is typical in the absence of a chinook setup.  Here's this afternoon's sounding from McGrath: below 0°F at the surface, but +45°F about 1800 feet above the surface. 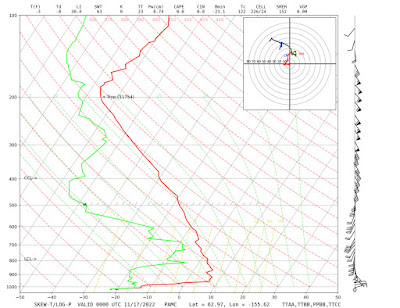 Posted by Richard James at 5:28 PM No comments:

First, an update on freeze-up at a couple of points of interest (at least to me).  The Tanana River at Nenana is partially but not fully frozen over, and the Yukon River over at Dawson appears to be frozen just downstream of town, but surface water is still moving in front of the webcam.  Beautiful light in both scenes: 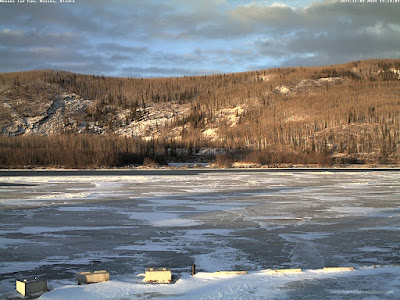 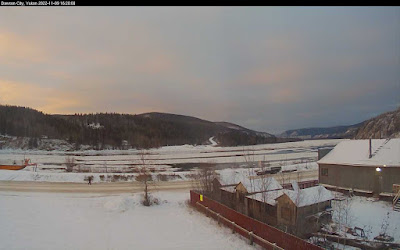 And now looking back at October's climate anomalies: NOAA/NCEI data indicates that the month's temperatures were (a) far above normal in Southeast Alaska, (b) modestly above normal along the rest of the Gulf Coast, and (c) near the normal of the last 30 years for the rest of the state. 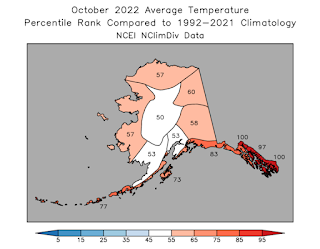 For the South Panhandle division, October tied the 1986 record for warmest October in the entire history since 1925.  This outcome is closely linked to the extremely warm sea surface temperatures across the northern North Pacific: 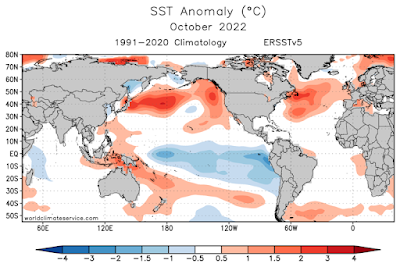 As for precipitation, October was another wet month compared to normal, the fourth in a row for the state as a whole.  The statewide July-October total precipitation was easily the highest on record, and the year-to-date statewide precipitation has also moved into first place in the history (1925-present). 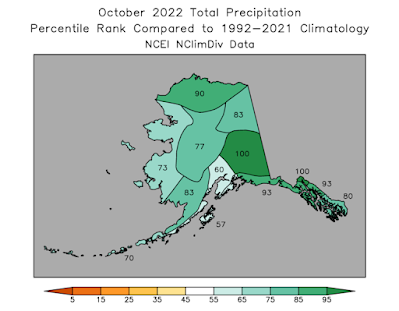 Interestingly, this is the first year since 1981 to fall in the top 10 for January-October precipitation statewide.

The ERA5 gridded reanalysis data agrees quite well this month, with the exception of precipitation for the North Slope (see below).  Of course the error bars on North Slope precipitation estimates are very large because of the regrettable paucity of ground-truth observations.  For what it's worth, Utqiaġvik reported 1.01" of liquid-equivalent precipitation, the fifth highest in the past 30 years, and the SNOTEL sites along the Haul Road recorded near-normal to above-normal precipitation. 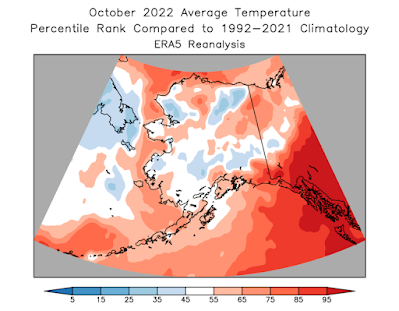 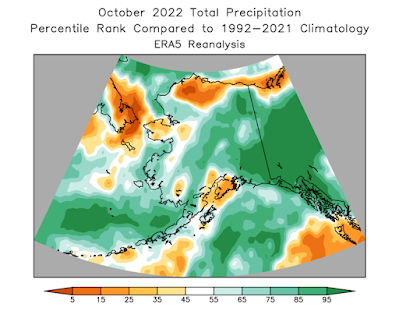 The Gulf Coast and southeast interior were much windier than usual, according to ERA5, but apparently western Alaska was relatively calm.  This is a bit of a surprise, given the lower-than-normal pressure over the Chukchi Sea. 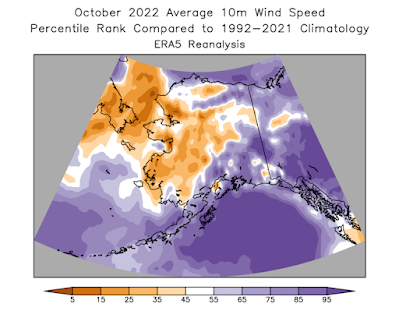 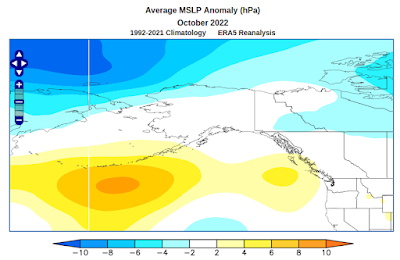 As for sunshine, it was in short supply again for southern and eastern Alaska. 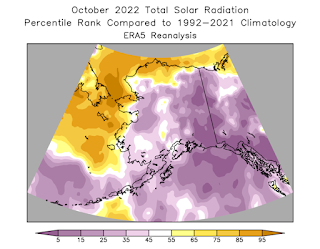 I'll update this post tomorrow with October's temperature reports from around the wider Arctic region. 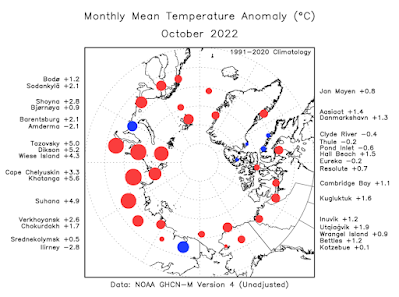 Here's the anomaly in terms of standard deviations: it was a significantly unusual month in central Arctic Russia. 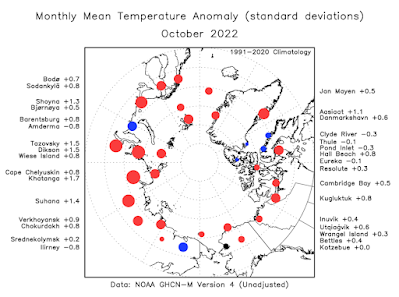 Posted by Richard James at 6:09 PM No comments: