Exceptional warmth for the time of year has developed across most of Alaska, putting a halt on freeze-up and even melting away the early snow cover in places in the past couple of days.  Most of the state has seen temperatures above freezing, including parts of the North Slope today; 37°F was observed on the Sag River at 69°N this afternoon.

On a statewide basis the "heat wave" is among the most significant observed this year when compared to normal temperatures for the date.  The chart below, courtesy of Rick Thoman, shows a daily temperature index for 25 sites around the state; the values (ranging from -10 to +10) correspond to percentiles within the historical distribution.  Since April there have been far more days in the upper tercile (red dots) than the lower tercile (blue dots), and yesterday's index value was the second highest of the year after June 8. 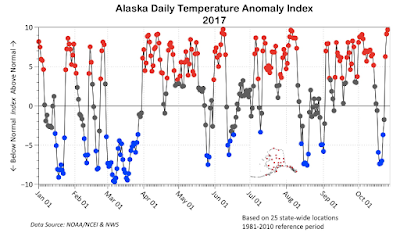 In addition to the warmth there has been rain: one-tenth of an inch of plain rain in Fairbanks yesterday, with nary a trace of snow falling.  In Tanana it has been raining steadily since mid-morning today (over 8 hours straight now), and temperatures aren't even particularly close to freezing; the dewpoint reached 37°F this afternoon, which is the highest on record for this late in the year - in fact it's the highest dewpoint observed there between October 19 and March 21 (based on data from 1950-present).

Here's the rather miserable scene in Tanana this afternoon: rain falling on a thin snow cover, with moderate ice moving in the Yukon River. 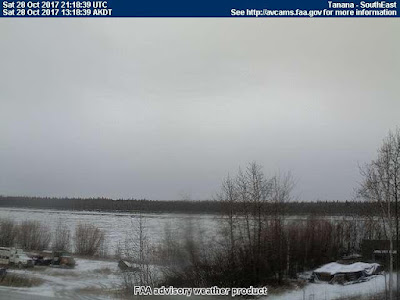 With the temperature in Fairbanks getting up to 42°F on Thursday, there is now only a trace of snow on the ground in the Golden Heart City.  Based on the long-term history, less than 20% of years have no real snow cover in Fairbanks on or after this date, but this year makes it 4 out of the last 5 years (2013, 2015, 2016, 2017).  The scene this afternoon on the UAF webcam - with more green than white - is not normal for October 28. 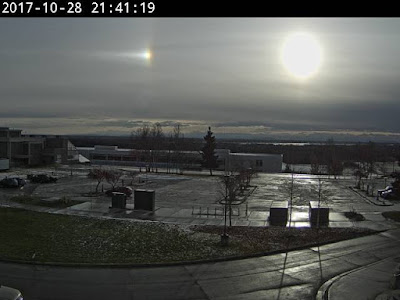 On another topic, the webcam shot is of interest for another reason too - notice the bright sun dog to the east of the sun.  Sun dogs are a rather common optical phenomenon caused by refraction and scattering of light through flat hexagonal ice crystals, generally (as in this instance) in high cirrus cloud.  The image also shows a hint of a 22° halo above and below the sun dog.  These phenomena are not unique to the northern latitudes, although the prevalence of ice crystals especially near the surface in the cold season does give rise to far more interesting optical phenomena than are commonly observed in warmer climates.