UAF published an interesting little article the other day about the long and valuable record of weather observations from the university's Experiment Farm:

In honor of the wonderful history of climate data from this site, here's a quick look at summer temperatures since 1911.  A few of the years are missing rather a lot of data (up to a month's worth in the 3-month period), but I've included those years in the chart anyway. 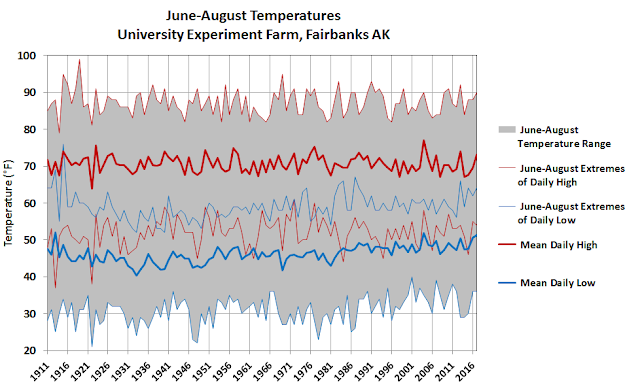 If this 76°F low temperature were believable, it would almost certainly be an all-time state record for highest daily minimum, and at first glance it might seem plausible because of the magnitude of the heat wave and the date on the calendar: June 26, a suitable date for very high overnight temperatures.  Unfortunately, however, the report appears to be incorrect, because marble-sized hail and 0.18" of rain were observed on the same day, and these surely would have brought the temperature to well below 76°F.  The relevant portion of the June COOP form is copied below.

As an aside, Rick Thoman has previously shown that the 99°F in 1919 is also wrong; the all-time heat record for Fairbanks stands at 96°F, observed in 1969.