The past few days have brought a fairly notable cold spell to the eastern and northeastern interior, with the first sub-minus 50°F temperatures of the season emerging at the usual cold spots.  Today is the fifth consecutive day with a daily minimum of -50°F or lower at the Chalkyitsik RAWS site near Fort Yukon, and this appears to be the most since January 2010 for that particular site (although there's a lot of missing data from 2012-2015).

It's been pretty chilly in Fairbanks too, with daily low temperatures below -30°F for three days, and a high temperature of -30°F on Saturday.  Of course solar heating is essentially zero at the winter solstice.  As an aside, here's a link to a very attractive solstice video from the other day.


Here's a time-lapse taken yesterday of the short daylight hours around the winter solstice in Fairbanks. Today, Fairbanks will only see 3 hours and 41 minutes of daylight, and the sun will only rise 2° above the horizon. #akwx pic.twitter.com/mCBQH8DKC1
— NWS Fairbanks (@NWSFairbanks) December 22, 2019

It has been a little unusual to see cold like this at valley level without colder conditions aloft.  According to the Fairbanks balloon soundings, the 850mb temperature did not drop below zero Fahrenheit; this temperature is colder than normal at 850mb, but not dramatically so - a colder air mass prevails about a quarter of the time in deep winter (per data since 1981).  In contrast, only about 5% of days see a high temperature of -30°F or lower in Fairbanks at this time of year.

This means, of course, that the surface-based temperature inversion has been strong; see Saturday morning's sounding below.  The surface-850mb temperature difference has been about 20°C in recent days, and this is exceeded on only about 7% of days in December and January - and more often than not it happens when conditions are warmer than normal aloft.  Big inversions tend to occur under high pressure, when clear skies and calm winds allow for strong radiational cooling, and at the same time subsidence aloft produces relatively warm, dry air above the inversion.  In contrast, cold air aloft tends to occur in association with a trough, which also typically brings cloudier and less calm conditions that don't promote a strong inversion.

So the unusual aspect of recent days has been the juxtaposition of relatively clear and calm conditions with a cool air mass, allowing surface cold to "outperform" over the northeastern interior.  One important reason for the absence of cloud is that the air aloft has been very dry indeed; the total column water vapor ("precipitable water") dropped to about 1mm late last week, which is down in the extreme lower tail of the historical distribution.  Less than 2% of soundings are this dry in Fairbanks in December and January.  The dryness of the air probably has to do with its origin in the high Arctic, as it seems to have been transported southward on the west side of a persistent and intense "polar vortex" near Canada's Banks Island.  This is illustrated below by the 500mb charts from last Friday morning and this morning respectively, courtesy of Environment Canada: 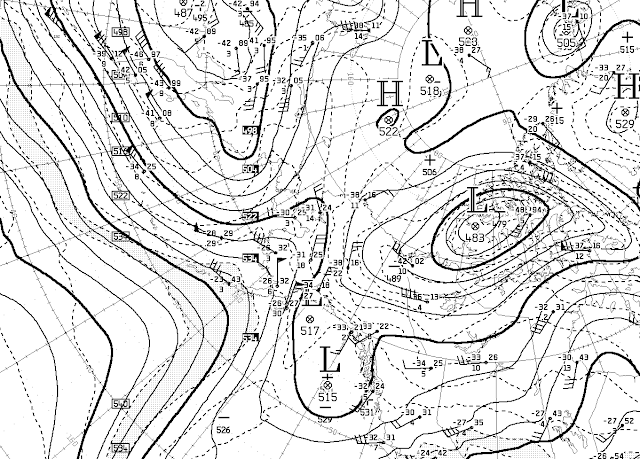 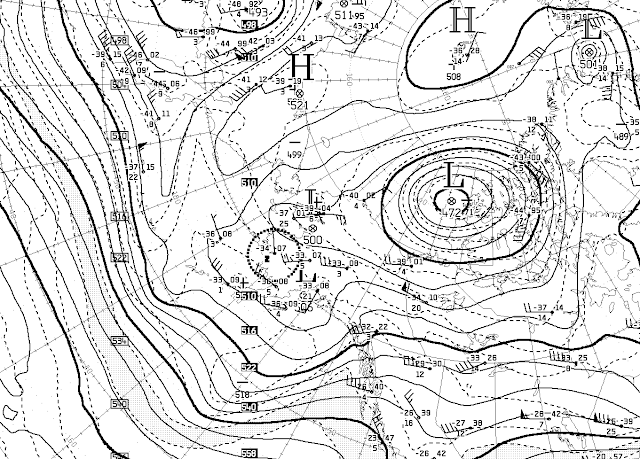 If we look at the history of precipitable water and surface-850mb inversion strength in Fairbanks, there is an inverse relationship, and this stands out particularly clearly when cold air is in place - see the figure below.  The blue markers show precipitable water versus inversion strength for the lowest 10% of 850mb temperatures in December and January; notice the uniformly low water content when the air is cold both aloft and at the surface (i.e. blue markers and strong inversion). 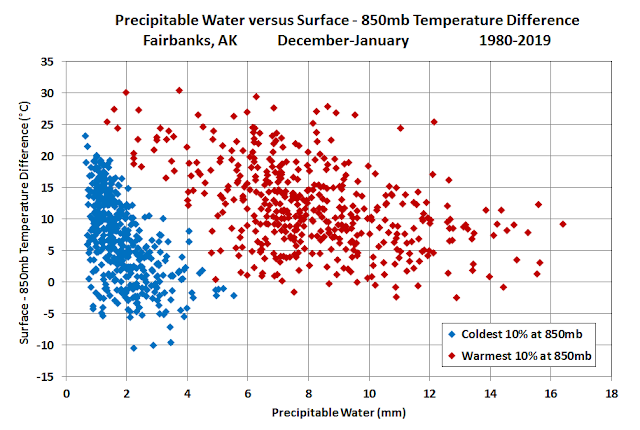 In conclusion, the combination of very cold and very dry air aloft is a recipe for extreme cold at the surface in Alaska's interior, and the last few days fulfilled the dry aspect of this.  There's a chance the "very cold" part may show up too in the near future; and this would be quite a shock to the system after all the warmth of recent years.   At the very least, the coming weekend looks to bring the coldest weather of the season so far.