The Nenana tripod went out yesterday, marking the break-up of the Tanana River at its confluence with the Nenana River.  As I noted last week, it's highly likely that the break-up was earlier than it would have been without such abundant run-off from excessive late winter snowfall across the region.

This claim is supported by the fact that this year's break-up occurred with the least number of thawing degree days (TDDs) on record in nearby Fairbanks: the total TDDs through yesterday in Fairbanks was 74.0, which narrowly beats out 2002 (74.5) and 2006 (75.0).  We might say this year's thaw season leading up to break-up was the coolest on record.

Here's an updated chart of the relationship between TDDs and precipitation amount from March 1 to break-up. 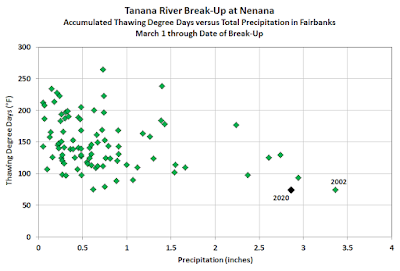 An interesting nuance here is that most of the years with high precipitation and low TDDs also saw relatively late break-up, in contrast to this year.  The chart below classifies the years as "early" or "late" simply based on whether break-up was before or after the long-term median of May 3 (and yes, there's a significant trend). 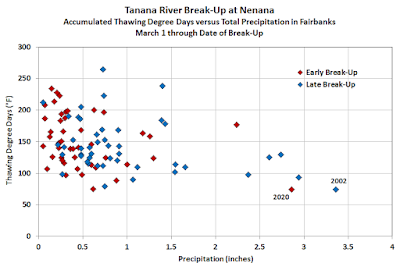 It seems that it's typical for wet years to also be cool in April, and this delays break-up in comparison to dry years; i.e. dry and warm tend to occur together in late winter and early spring.  This complicates the picture a bit, because the stronger sunshine at later dates allows late break-ups to occur with lower TDDs independently of precipitation effects.  So the precipitation/TDD relationship isn't quite as simple as "more run-off means earlier break-up"; the relationships are complex.

A final bit of chart analysis (see below) illustrates that the very latest break-ups reliably occur after low TDD totals; but this year was unusually early for such low TDDs.  I suggest this is almost certainly because of the increased run-off related to the wet conditions of the past 6 weeks. 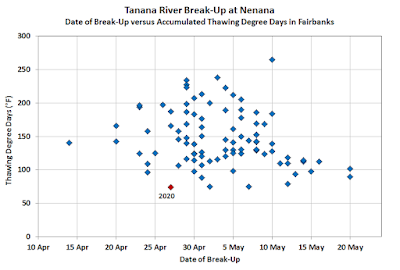