In keeping with recent posts on increased warm-season precipitation, rainy weather has become persistent in Fairbanks-land this month.  Each of the last 7 days, and 9 of the last 10, have seen measurable rainfall in Fairbanks, and although total amounts have not been excessive, the year-to-date precipitation now stands at 9.47", which is not far off the pace of 2014.  At the CRN site to the northeast of Fairbanks, 2020 precipitation is just about tied with 2014.  Here's a chart of the accumulation relative to the 2002-2019 normal for the CRN site. 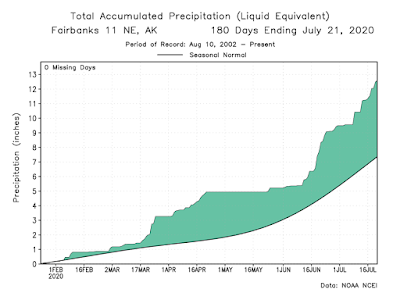 After a notable cool spell a few weeks ago, daily average temperatures have been hovering very close to normal, although daily highs have remained on the cool side because of cloud and rain. 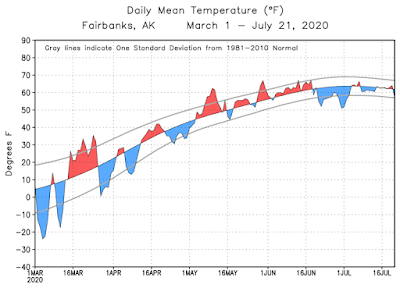 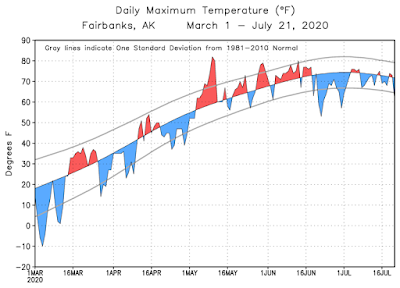 Given the date on the calendar, the 82°F on May 10 is now somewhat likely to go down as the highest temperature of 2020, and this would be the earliest date on record for setting the year's high temperature.  The current record for that climate statistic is the amazing 88°F on May 11, 1995, and interestingly 1995 was also a year with a developing La Niña during summer, a very warm North Atlantic, and a very active Atlantic hurricane season.  1995 also saw extreme warmth in September in Fairbanks, with an incredible 78°F on the 21st, and I've always found it fascinating that the same year holds the records (by some margin) for most extreme warm spells on either side of summer.  I wonder if something similar could happen this year...