I don't usually comment on weather in Southeast Alaska, but the past few days brought an extremely intense rain storm that broke longstanding records in the northern part of the region.  All-time records for calendar-day precipitation fell at Juneau, Skagway, and Haines, and unfortunately damage from flooding and a major landslide occurred in Haines.  Here's a summary from NWS Juneau as of 11am yesterday, and more rain fell after that. 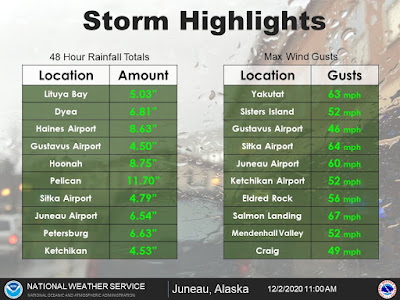 The two animations below show precipitable water (the total vertical atmospheric water content) during two 24-hour periods, illustrating the tropical moisture source and the remarkable persistence of the "atmospheric river" directed into the Southeast.

48 hour rainfall totals from 5-14", wind gusts of 65 mph, 30+ inches of snow, debris flows, flooding, you name it we saw it. The image shows deep moisture surging into the SEAK from the tropics. #AtmosphericRiver #akwx .@KTOOpubmedia .@KHNS_FM .@cbjuneau .@UWCIMSS pic.twitter.com/JkudNcIhar

Meanwhile over the Pacific... upstream of the high-amplitude pattern over North America... an atmospheric river which resulted in the #Haines landslide in #akwx, and now lots of swirls pic.twitter.com/f2I3ZTrzEl

If we look at past episodes of extreme rainfall in Juneau in early winter (October through December), it's interesting to note that 5 of the top 6 (since 1950) highest 2-day precipitation totals occurred during La Niña conditions, and 3 of these were rather strong La Niña episodes similar to the one we're currently experiencing.  Those 3 events were Oct 19-20, 1998, Nov 29-30, 1988, and Dec 27-28, 1999.

This is an interesting point because La Niña more often brings drier, not wetter, conditions to Southeast Alaska for the second half of the rainy season as a whole (i.e. early winter).  Since 1950, 10 of the 15 strongest La Niña's in October-December were drier than normal overall in Juneau, and the map below shows the spatial pattern of early winter precipitation for strong La Niña years.  More investigation would be needed to be sure, but this may be an example of weather extremes having a different sensitivity to climate forcing than seasonal weather averages. 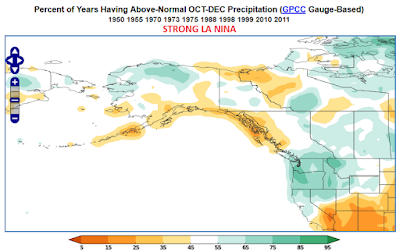 I mentioned last month that Fairbanks also has an enhanced frequency of heavy precipitation events during La Niña winters.  The chart below illustrates this for 2-day snowfall totals of 6-9" (blue) and over 9" (purple). 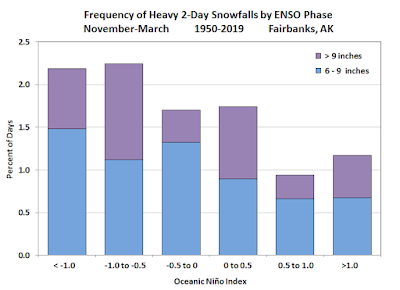 The same relationship (warmer ENSO -> lower chance of heavy snow) is evident in both early winter and late winter. 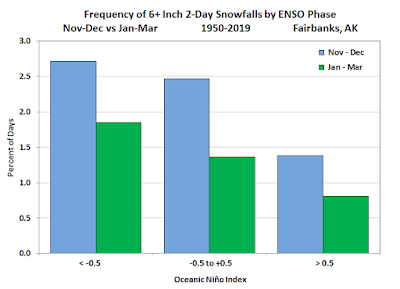 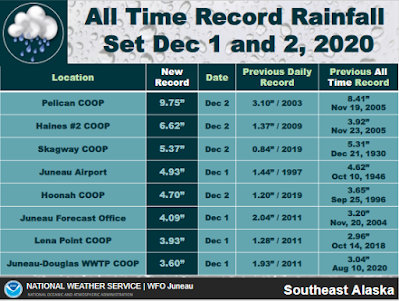