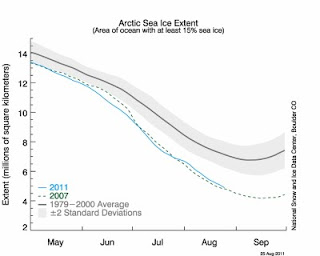 All eyes are on Hurricane Irene now, but here's a quick update on Arctic sea ice coverage, from the folks at the National Snow and Ice Data Center, and as usual, the news isn't good. As of August 25th, total sea ice coverage is just barely above the record low year of 2007. What's interesting about this is that the atmospheric conditions this summer have not been a repeat of 2007. There have been times that it has been similar, but others when it has not been. This shows the impact of the now much thinner ice than was in place in 2007.