Putting Down the Winter Snowpack 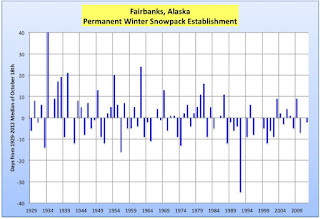 The Fairbanks area received three to five inches of snow over the course of several days early this week, with the result that everywhere in the area now has a solid snow cover. In spite of the mild weather early in the month, this is right on schedule: the long term median date for establishment of the permanent winter snow cover is October 18th. It is possible, but high unlikely, that the current snow cover could be reduced to a trace. Since 1929, twice has there been two inches of snow on the ground (the current snow depth at the Airport) on October 20th, only to have it melt back to a trace later in the month. Snow cover is defined here to be a snow depth on one inch or more at the standard time of day for snow depth reporting (traces do not count) and each day thereafter also has one inch or more on the ground through March 31st.

A couple of things stand out on the chart. First, in the past twenty years there has been much less variability in when the winter snow pack was established compared to previous decades (only one year more than 10 days from the median). Also note that it's a lot more common to have very late establishment of snow pack than very early. Only two autumns has the snow pack been established more than 15 days early (1956 and 1992), but seven times has the snow cover been more than 15 days late (though none since 1982). This includes the remarkable autumn of 1934, when the thin snow cover of November was obliterated by the super Chinook of December 3-8, 1934 and then there was no measurable precipitation until after the day after Christmas, resulting in the only "brown Christmas" in Fairbanks weather history.
Posted by Rick at 12:29 PM