The severe blizzard that affected the eastern North Slope on Saturday night was notable for its ferocity in the Barter Island community of Kaktovik, as documented in a news article here.  The highest sustained wind measured at the Barter Island ASOS was 49 knots (56 mph), and the highest gust was 58 knots (67 mph), but the anemometer did not report for several hours during the height of the storm.  It seems very likely that winds were significantly stronger for a time.

How does this storm compare to past high wind events on Barter Island?  The history of hourly observations contains quite a number of bogus wind reports in recent years, but after removing these I found that there have been 18 separate dates (in 13 separate winters) since 1950 on which sustained wind speeds reached 60 knots (69 mph).  All but one of these occurred in November through March.  Without question, Barter Island is a very windy place in winter, and near-hurricane force winds are not all that uncommon.  The top three wind events since 1950 are as follows:

It's interesting to note that most of the 60+ knot events were in the 1950's and 60's, and there do not appear to be any reliable reports of 60 kt or higher since 1995.  This could be due to different wind speed measurement parameters with the introduction of ASOS - but it is surprising nonetheless.

The highest winds at Barter Island are nearly always from a westerly direction, as in this weekend's storm.  The climatological distribution of wind speed also shows a pronounced maximum for east-southeasterly flow (see below), but easterly flow does not bring the same extremes in wind speed.  Winds from the north and south are typically light and are also much less frequent. 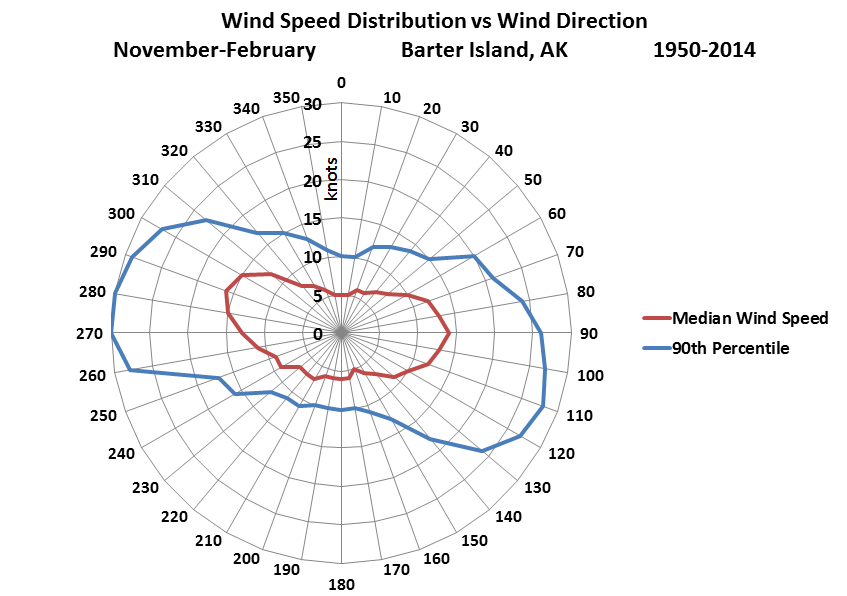