The recent very unusual warmth in the Arctic has drawn considerable attention from various quarters, and justifiably so; the conditions have been quite extreme.  Here's an estimate of the temperature anomaly for the week ending November 20, based on NOAA's CFS reanalysis data.  Temperatures have been 15-20°C above even the relatively recent 2001-2010 normal over parts of the Arctic Ocean; but parts of Siberia have endured a correspondingly extreme cold anomaly. 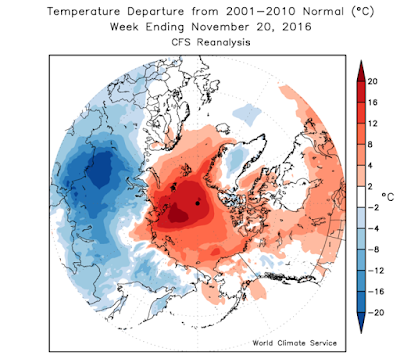 Pressure and temperature analyses over the same period (see below) show that the recent Arctic warmth was connected to a circulation pattern involving low pressure in the Norwegian and Greenland Seas and high pressure over central Russia.  The flow associated with these features transported warm air into the Arctic from far to the south over western Europe and the North Atlantic Ocean.  Therefore an absence of Arctic sea ice is not the only reason for the warm conditions, but of course the mutual reinforcement of open water and warm air helped to amplify the anomaly. 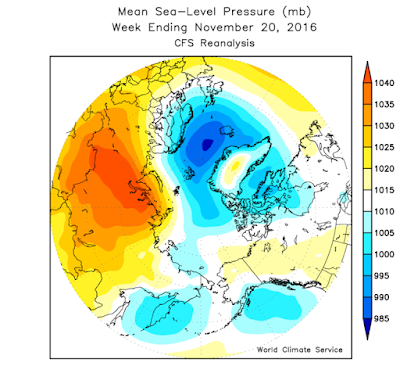 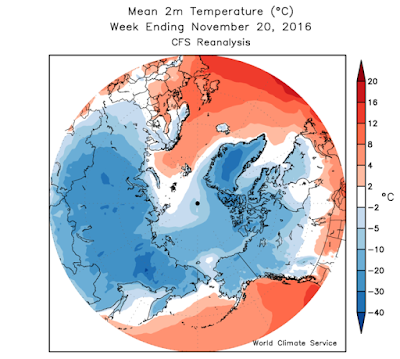 One question that occurred to me is whether the Arctic warm anomaly may be a lingering result of last winter's strong El Niño episode.  Could a warm early winter in the Arctic be an amplified reflection of the jump in global temperatures that always accompanies El Niño?  The chart below shows that the answer is no, and in fact the reverse is true: on average, El Niño tends to be followed in the early part of the next winter by colder November-December conditions in the high Arctic (north of 80°N), whereas La Niña quite reliably brings unusual warmth in the subsequent winter. 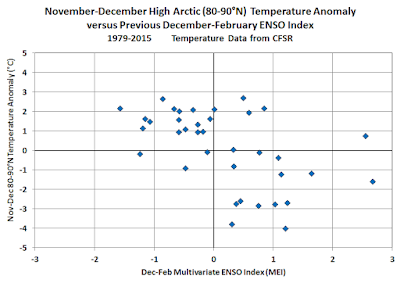 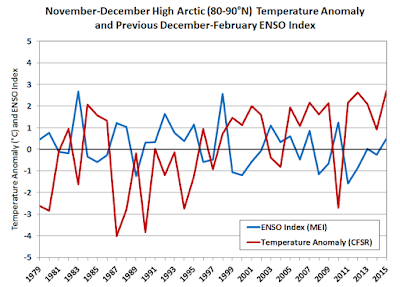 Nevertheless, a fairly robust correlation remains after removing the long-term trends - see below.  It's interesting, however, that the two strongest El Niño's (1982-83 and 1997-98) were followed by near-normal Arctic temperatures relative to the long-term trend. 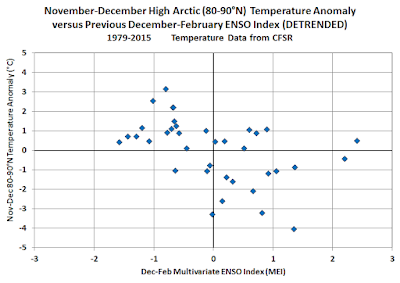 Looking at a map of the correlation coefficient, we see that the region from the Barents and Kara Seas to the North Pole shows the largest inverse correlation between early winter temperatures and the ENSO conditions of the previous winter.  This region is similar to the area that has seen the most anomalous warmth recently, but this year's conditions are opposite to what the historical correlation shows!  If the historical connection were being reflected this year, then the high Arctic would be cold, not warm, at the moment.  This is puzzling, but it seems to show rather clearly that we can't blame El Niño for the current warmth. 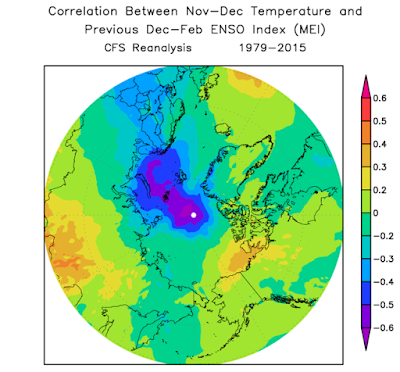 Looking at the MSLP correlation to the previous winter's ENSO index, the map below shows that El Niño tends to be followed by high pressure over western Europe and low pressure over Siberia in November-December of the next year.  Again this is roughly the opposite of what we have seen this year. 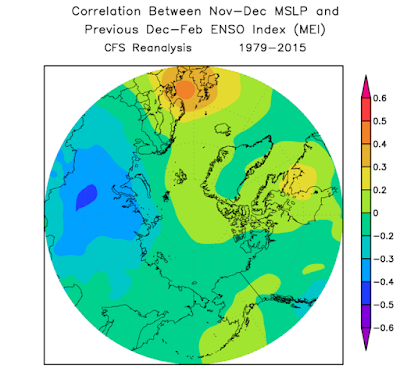 Posted by Richard James at 6:01 AM