Last week I noted the very unusual lack of cloudiness in Fairbanks since the beginning of October, and now that the month's climate data is complete, the magnitude of the anomaly stands out more clearly.

First, it's remarkable to observe that the airport's ASOS instrument reported less than 50% cloud cover on 23 of 31 days, which ties a record for any month of the year: only March of 2002 and March of 2011 had this many mostly-clear days (based on ASOS data since 1998).  Of course, March is usually much less cloudy, with an average of 14 mostly-clear days compared to October's normal of 5 days.  The next closest October for mostly-clear days was 2009, with only 10 days. 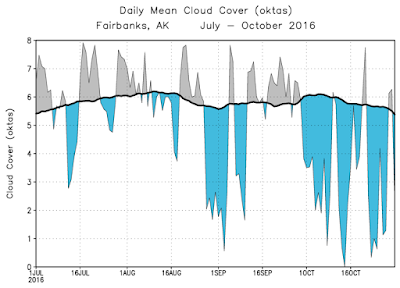 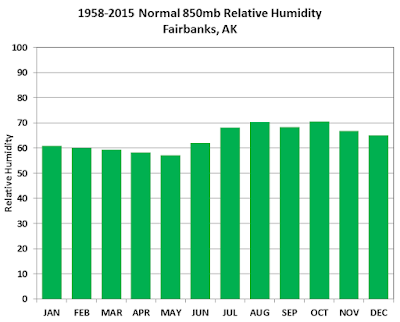 Compared to past Octobers in Fairbanks, the low humidity aloft was really extreme: the monthly mean 850mb relative humidity was 4.9 standard deviations below the 1981-2010 normal. 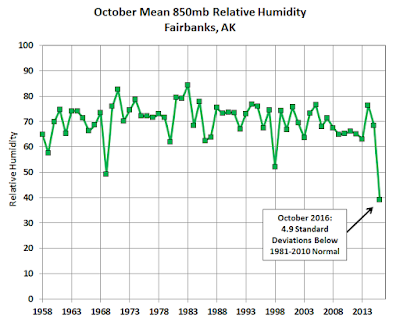 As noted in the previous post, the clear weather has been caused by a very persistent high pressure ridge over the state, leading to subsidence and drying aloft together with blocking of normal moist westerly winds.  Despite a lack of snow cover for most of the month and windy conditions at times, the clear skies allowed surface temperatures to drop relatively low compared to the pronounced warmth aloft: the month's mean surface-850mb inversion was the strongest on record for October.

October's "blocking" circulation pattern was pronounced around the Northern Hemisphere, with high pressure across the Arctic Ocean and a strongly negative Arctic Oscillation.  It's interesting to note that the Arctic Oscillation and its cousin the North Atlantic Oscillation have tended to be negative during October in the past 15 years, and this seems likely to be related to the loss of Arctic sea ice at this time of year.

With clouds in short supply over Fairbanks in the past month, precipitation was nearly zero; the October total liquid equivalent was 0.02", the lowest for the month since 1914.  The meager snow cover from the 20th has mostly sublimated or melted away, and the airport's snow depth measurement has been down to only a trace for several days.  However, there's variation from place to place; a downtown webcam showed a thin snow cover today, but the ground is basically bare on UAF's West Ridge and up at Cleary Summit. 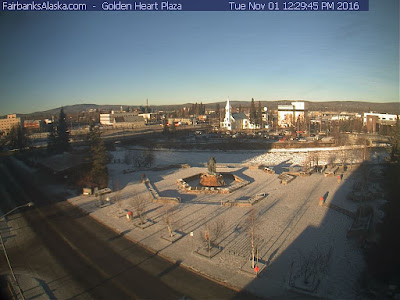 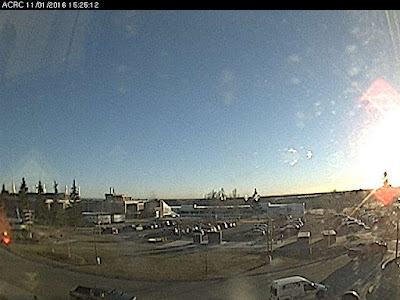 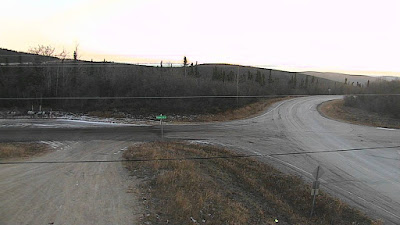