Here's a brief update on temperatures at climate observing sites around the Arctic Ocean in the month of December.  According to monthly data from a set of 19 stations, December was nearly but not quite the warmest in the period of record I've used here (1971-present), with an average departure from normal of 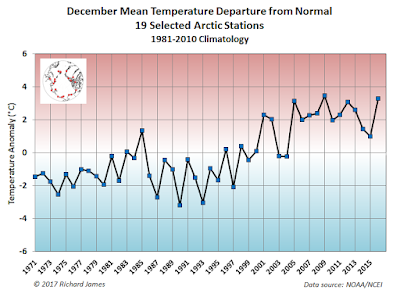 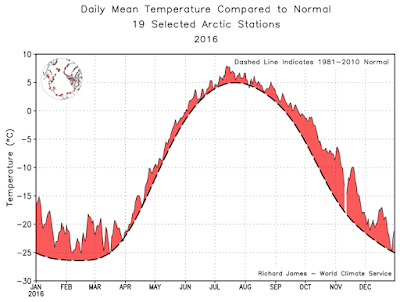 If we look at the annual number of days with a mean daily temperature below normal (see below), there was a sudden drop-off in 2005, but for the past decade the number of below-normal days has been relatively stable; the 2005-2015 average was about 75 days or 20% of the year.  However, 2016 was quite different, with below-normal days becoming rare for the Arctic coastline as a whole, and even more so in the second half of the year; the last below-normal day was August 5, 2016 - more than 5 months ago. 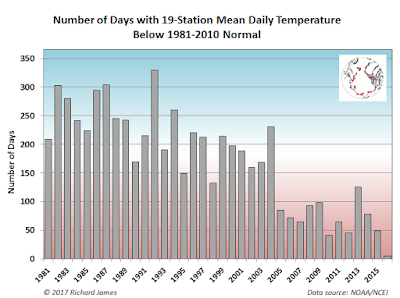 The near-complete absence of below-normal temperatures in 2016 is entirely consistent with ECMWF model estimates of high Arctic (80-90°N) air temperatures, as calculated by the Danish Meteorological Institute; their 2016 chart (see below) shows no below-normal days at all outside the summer season.  The charts provided for earlier years on the DMI website show nothing comparable for sustained anomalous warmth in the reanalysis history back to 1958. 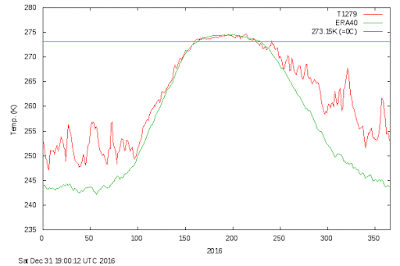 Posted by Richard James at 2:11 PM