Rick T, here. Just a quick follow-up on the question of ice fog and possible impacts on surface temperatures. Ice fog and its impact on surface temperature is a tough nut to crack to due many confounds: societal changes, e.g. people leaving vehicles running, urbanization changes, airport siting and activity, ASOS vs. human observed visibility, etc.

My sense is that, physically, the long wave radiational depth of the ice fog (analogous to optical depth) is what matters for surface temperatures, which I don't think has much correlation to reported (horizontal) visibility. I think the the temperature manifestation of this can be seen in the RAOBs with very low surface temperatures when lapse rates become neutral or negative (i.e temperatures are steady or following with height).
Here are two very cold soundings, one from January 1969, the pre-pipeline era, and one from 1989, with a significantly expanded urban environment and many more automobiles operating.  The 1969 sounding looks like a myriad of other winter soundings in Fairbanks: the temperature at the airport was about 15C lower than 400 meters up. The 1989 sounding is much different and quite unusual, with slight cooling in the lowest 400 meters. No two situations are of course the same, but part of the reason for the dramatic difference is, I think, the depth of the ice fog. In spite of very low visiblities in both cases, I'd suggest that in the 1969 case the ice fog was very shallow, while in 1989 it was thick enough that the effective radiative surface was the ice fog top (~600), with weak mixing within the ice fog. 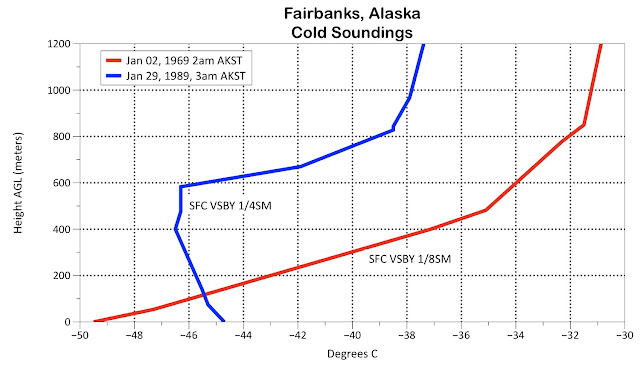 In any case, no hard science here, just my sense of some of the issues involved based on my years of trying to forecast in these conditions.