Warm chinook flow from the south lifted temperatures above the freezing point on Thursday night in Fairbanks for the first time in more than a month.  Thursday's high temperature, which occurred at 10pm, was 37°F, but this isn't close to a daily record; the extraordinary chinook of early December 1934 set all the high temperature records in Fairbanks from the 3rd to the 8th of the month (including 58°F on December 5).  Nevertheless, the flow anomaly from this week's event was impressive; the map below shows the 500mb height analysis from 3pm Thursday. 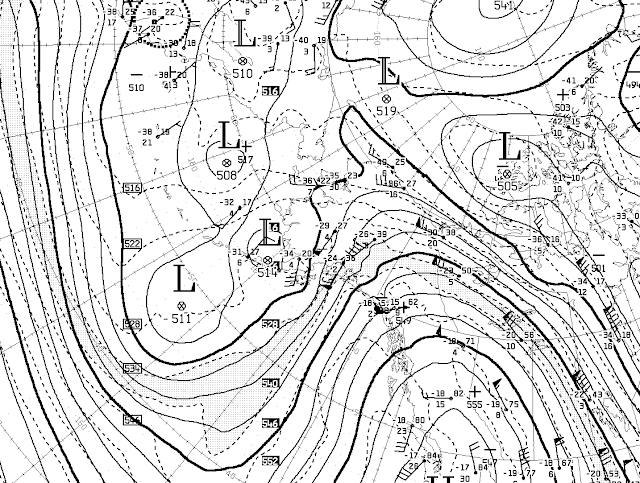 It's obviously unusual for temperatures to rise above freezing in the depths of winter in Fairbanks, but most years do see at least a brief thaw at some point in December through February; only 10 years since 1930 remained below freezing throughout the 3-month period (most recently 1998).

The chart below shows the number of days each winter on which the daily high temperature was above 32°F in Fairbanks, and the red shading indicates how many days the daily mean temperature was also above freezing - the latter being a much rarer event.  The relative abundance of warm days prior to about 1945 may have something to do with the fact that measurements were taken downtown from 1930-1942, rather than at the international airport as they have been since 1951. 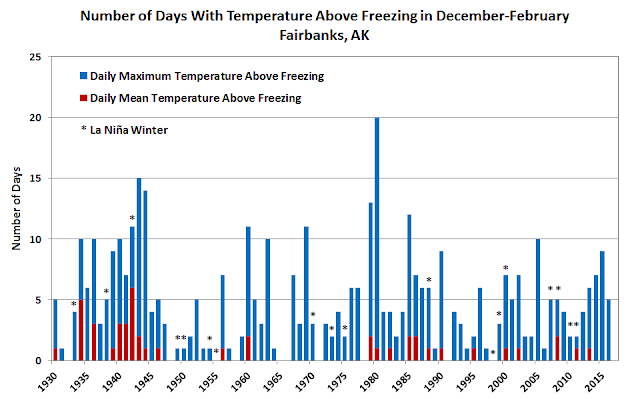 The asterisk annotations indicate winters when La Niña conditions were present in the tropical Pacific Ocean, as they are this year.  Despite the fact that La Niña winters tend to be colder on average in Fairbanks, the frequency of warm days is not much reduced, and this is because the temperature variability is heightened during La Niña winters.

The scatter plot below shows how the number of above-freezing days varies with an index of the El Niño/La Niña (ENSO) phenomenon.  A clear peak is evident for near-neutral ENSO conditions, and this is an interesting example of non-linearity in climate behavior; while El Niño winters tend to be warm on average in Fairbanks, the number of very warm days is no higher than normal, because temperature variability is low.  I've discussed this kind of thing before. 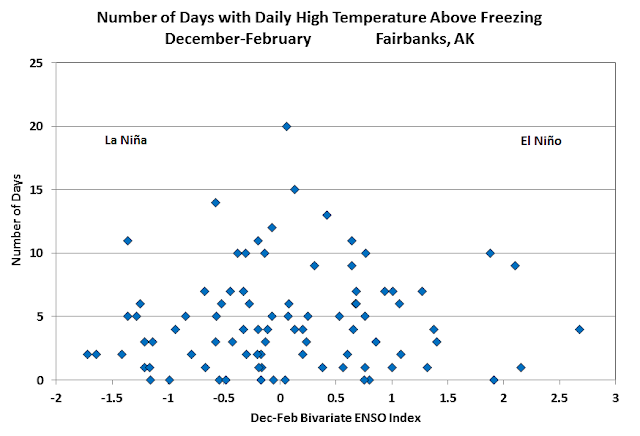 The same chart for the PDO rather than ENSO shows a hint of the same behavior, although there is more asymmetry between the positive and negative phases.  There is a notable reduction in warm day frequency when the PDO is significantly negative, but so far this winter the PDO is near-neutral. 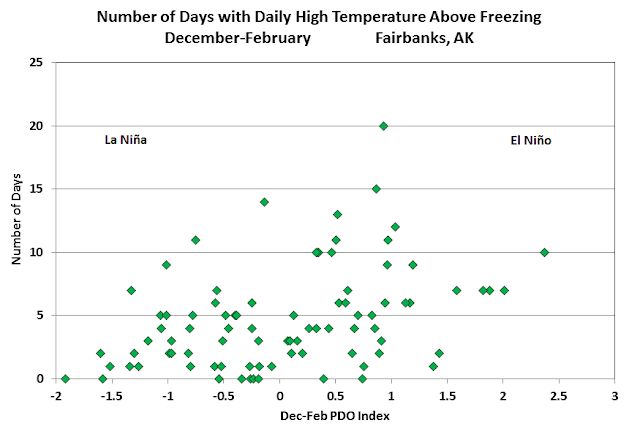