Lightning has been widespread over Alaska in the past several days, and wildfires have sprung up as an inevitable consequence.  According to the latest information on akfireinfo.com, fires have burned about 25,000 acres statewide so far this season, which is about normal for the time of year.  Fire activity typically ramps up quickly in June, with burn acreage often exceeding 200,000 acres by the end of the month.

Year-to-year variability of fire acreage in Alaska is a very interesting topic and a fascinating and challenging prediction problem.  I'd like to do an in-depth study of it one day, but today I'll just make a couple of points.  First, consider the map below, showing a 23-year correlation between sea surface temperatures in May and the subsequent fire acreage rank.  I've used the rank of the fire acreage (with higher rank for higher acreage) rather than actual acreage numbers because the distribution is strongly non-Gaussian. 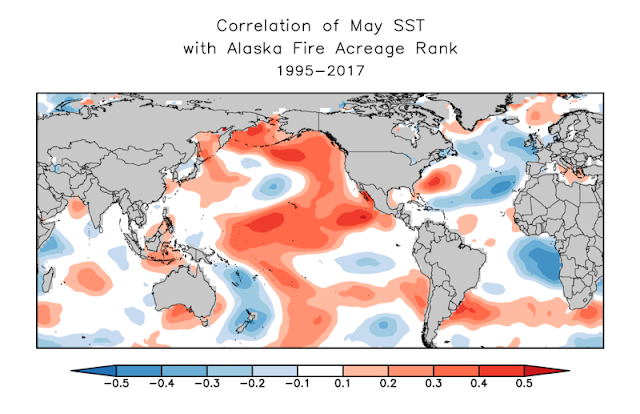 The color scheme on the map rather exaggerates the statistical significance of the correlations, as the highest values are only 0.4-0.5, but nevertheless it's interesting to see that fire activity is favored by warmer ocean conditions in both the northern North Pacific and the central tropical Pacific.  The horseshoe-shaped pattern looks quite reminiscent of the PDO pattern, but actually it's a bit different; the typical PDO horseshoe hugs the coast of North America more closely and has a strong inverse correlation with SSTs extending east of Japan to south of Alaska.  Alaska fire acreage is actually nearly uncorrelated with the PDO index in May. 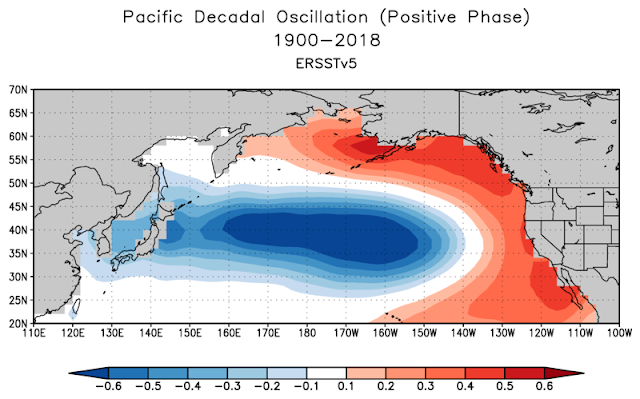 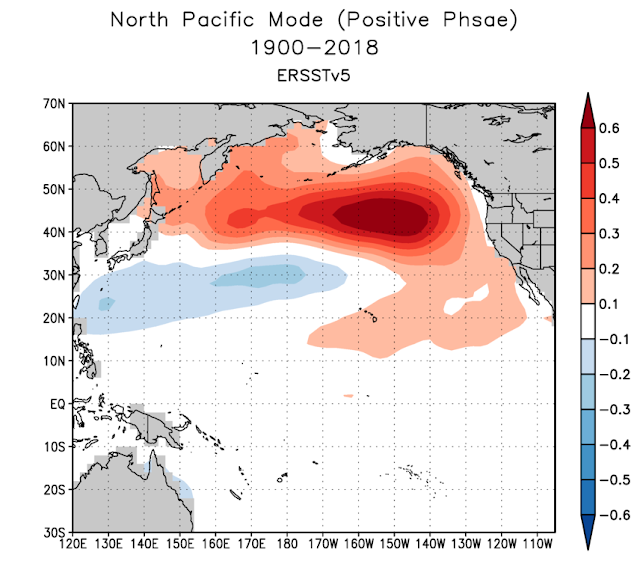 So what do current conditions look like?  The map below shows the May analysis; the NPM was slightly positive, as it has been for the last 4 months, but it's not a dramatic anomaly (excepting the Bering Sea warmth).  This suggests that ocean temperature patterns are only slightly favorable for enhanced fire activity this year.  As an aside, there seems to be no sign of the strongly positive NPM phase that the long-range models were predicting earlier in the year (and are still predicting). 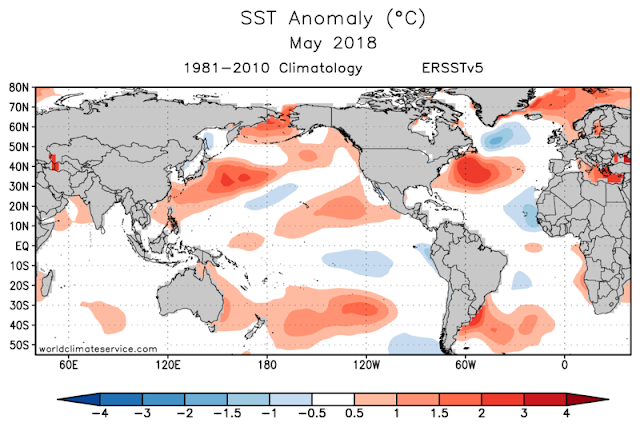 We can also search for fire-acreage-related precursor patterns in the atmosphere.  According to the map below, there is a statistically significant - but not highly robust - correlation between 500mb heights over Alaska in May and subsequent fire acreage.  This makes sense; if the weather pattern sets up with a ridge over Alaska during May, then dry and sunny conditions will reduce fuel moisture, and the next month or two are also more likely than not to be warm and dry. 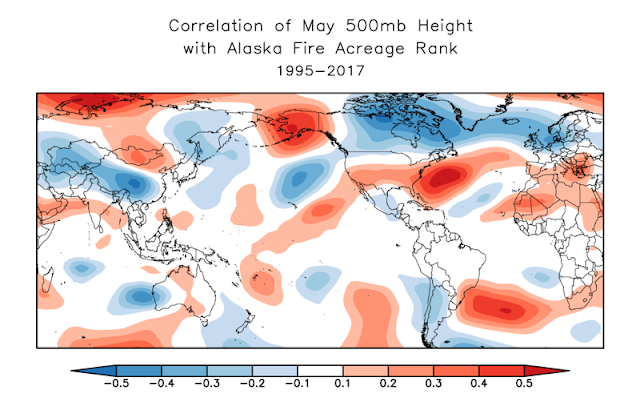 How about May 2018?  Rather than having a ridge over the state, there was a trough over the southwest, and most of the interior was wetter than normal.  So this points to reduced fire activity, albeit with low confidence. 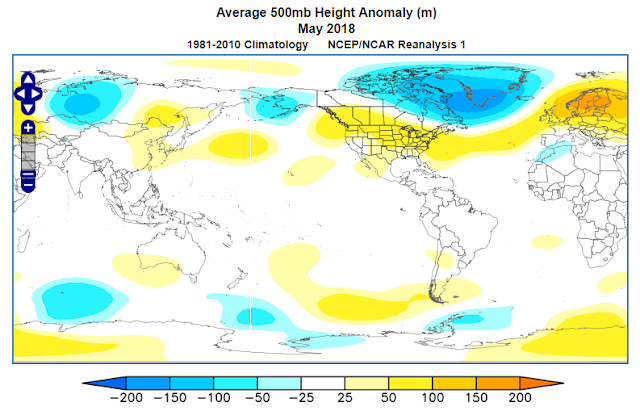 And now perhaps the most interesting result that I've stumbled upon in this brief analysis.  The map below shows the average SST anomaly in winters following the 6 most active fire seasons since 1995.  Most readers will recognize the pattern immediately: the warm band along the equator in the central and eastern Pacific is a classic El Niño pattern.  This suggests that very active fire seasons in Alaska have a strong tendency to be followed by significant El Niño episodes. 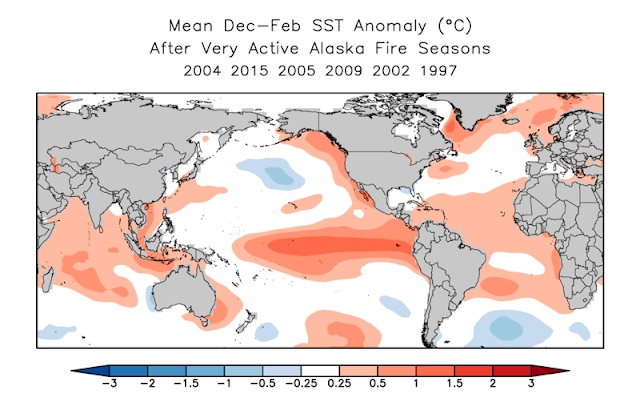 The chart below confirms the rather remarkable statistical connection; the 4 strongest El Niño's since 1995 were preceded by Alaska fire acreage in the top quartile (6 of 23) since 1995.  Naively this suggests we can use Alaska fire acreage as a predictor for El Niño - but why would this be?  My take is that the atmospheric and oceanic patterns that evolve into major El Niño events are already unfolding in the summer months prior to the classical winter peak of El Niño, and those patterns happen to be very favorable for Alaska wildfire. 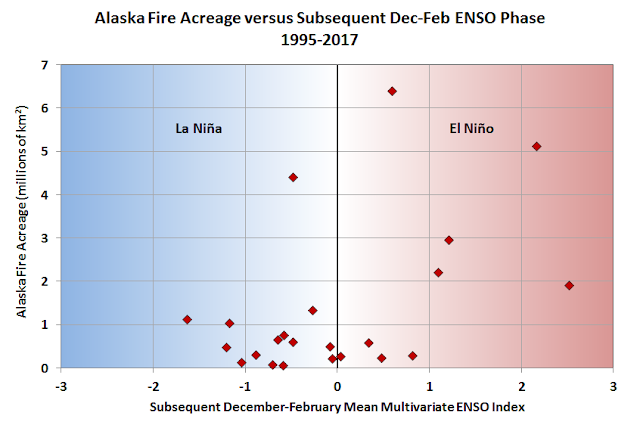 The last point to make is that the latest data from the long-range computer models have recently shifted quite decisively in favor of El Niño for the coming winter (2018-19); so it will be most interesting indeed to see how the rest of the fire season evolves in Alaska.