Prompted by a question from reader Tracy on permafrost depth in Fairbanks, I recently tracked down some soil temperature data at the UAF Geophysical Institute's Permafrost Laboratory, headed by Professor Romanovksy.  A wealth of data is available, so I chose a site more or less at random: Smith Lake #1, located close to Smith Lake on UAF's North Campus.  Daily temperature data are provided from 2007 through May 2017, which is long enough to provide a few interesting results.

First, the chart below shows the sequence of annual mean temperatures at depths down to 3m (click to enlarge).  Immediately we're struck by a remarkable trend towards higher temperatures in the past decade or so, with the top 50cm seeing an annual mean temperature above freezing in 2016.  There was a big jump between 2013 and 2014, which is not surprising as Fairbanks' mean air temperature was more than 7°F warmer in 2014 than in 2012.  And ever since the remarkable transition from cold to warm in May of 2013, Fairbanks has seen persistent anomalous warmth with few significant excursions to the cold side of the climate.  The integrated effect of this warmth is clearly visible now in the sub-surface warming trend. 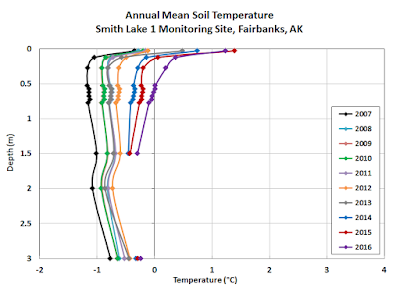 Secondly, as a partial answer to Tracy's question about seasonal thaw of the active layer (i.e. the top layer of permafrost that thaws and refreezes each year), the chart below shows annual maximum temperatures at each depth.  (Note that the 2m depth is missing from 2014-2016).  From 2007 through 2013, the seasonal thaw did not generally extend down below 50cm, but more recently the active layer has deepened to something like 1m. 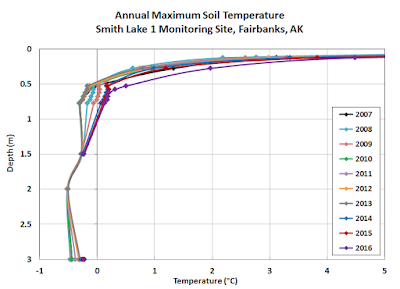 Looking at annual minimum temperatures, it is really remarkable to see that by 2016 temperatures below 50cm depth were barely below freezing even at the coldest time of year.  It doesn't take too much imagination to envision a complete loss of the permafrost in this particular profile, which would upend the ice/water profile: as it stands now, seasonal thaw sits atop permanent ice, but Smith Lake #1 may soon see seasonal ice atop permanent thaw. 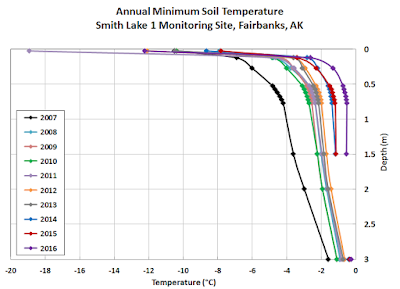 For a bit more perspective on the recent changes, here's the temperature time series from 0.525m depth.  March 2017, which was the one really cold month in recent years, produced a minor recovery compared to previous years, but presumably last winter's warmth (not yet reflected in the available data) will have reinforced the warming trend as strongly as ever. 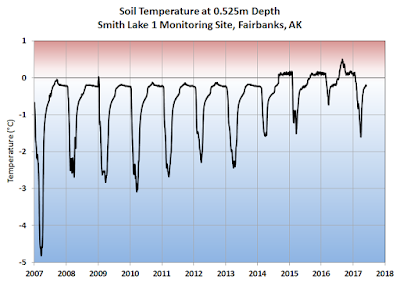 Posted by Richard James at 6:32 PM