Much of Alaska has enjoyed a most remarkable extended spell of clear, dry, calm, and warm autumn weather in the past couple of weeks, thanks to an extremely strong and persistent ridge of high pressure centered over the Bering Sea.  Here's a map (click to enlarge) showing the 500mb height anomaly (departure from normal) in the first two weeks of this month, expressed in terms of standard deviations.  Near St. Lawrence Island the 500mb height has averaged more than 2.5 standard deviations above normal for a period of two weeks.  This is a remarkable anomaly. 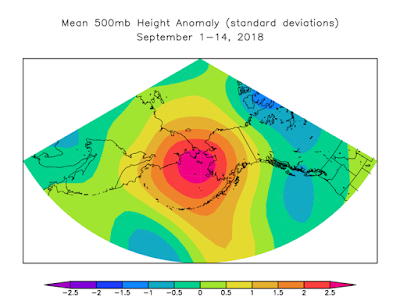 Courtesy of Environment Canada, here's the 500mb analysis from last Saturday afternoon when the blocking ridge was in full swing. 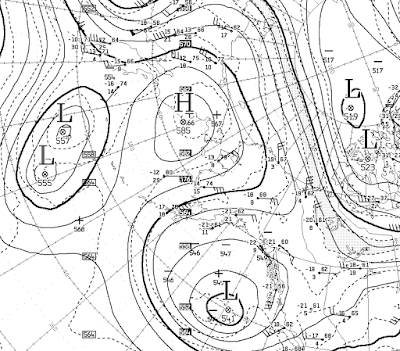 As of yesterday afternoon the ridge was much weaker but still quite sufficient to dominate the weather over much of Alaska. 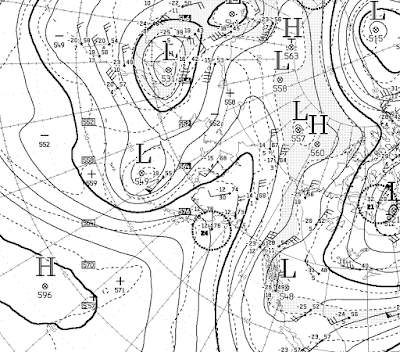 The chart below shows the 500mb height measurements from the sounding site on St. Paul Island in the southeastern Bering Sea.  The gray lines represent the one-standard deviation range either side of the 1981-2010 normal.  The persistence of the very strong positive height anomalies is notable, to say the least. 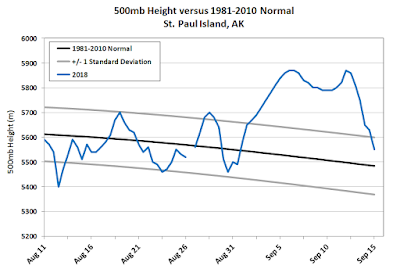 Another perspective on just how unusual this is can be gleaned from the history of September 1-14 measurements at St. Paul Island - see below.  I'm not sure that I've ever seen a multi-decadal climate chart with such an extreme anomaly in only one year that lies so far outside the envelope of observed climate.  It's quite astonishing. 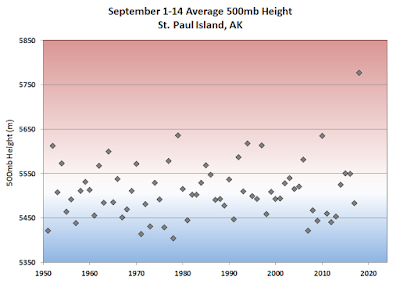 Unfortunately Alaska's sounding sites farther north have not been reporting regularly this month, but I pulled out the equivalent data from the NCEP/NCAR Reanalysis at a grid point near the Bering Strait - see below.  The result is similar but actually even more extreme relative to the climate of recent decades. 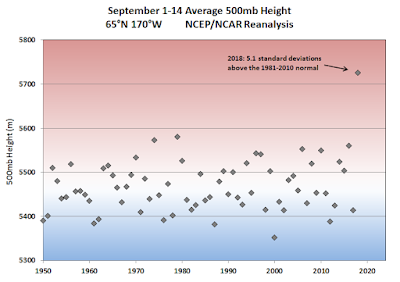 Compared to the 1981-2010 climate, the mean 500mb height of the past 14 days has been 5.1 standard deviations above normal.  If the reanalysis is correct (and it should be quite accurate for 500mb height), and if the 500mb climate is Gaussian and stationary (unchanging), then we'd expect this kind of anomaly to occur less than once every million years, on average (for this particular date window).  Obviously one or more of the assumptions is false, but this illustrates the magnitude of the extreme.

What might have caused such a remarkable departure from normal?  I suggest a couple of possible causes.  First, it seems like the chain of events to set up the ridge started in late August when a burst of tropical cyclone activity occurred in the West Pacific.  Typhoon Cimaron (Category 3) hit Japan on August 23 and then the remnants headed up to the Aleutians, and on the same day Typhoon Soulik (also Category 3) hit South Korea and then moved into the Bering Sea.  Then about 10 days later Typhoon Jebi (Category 5 at one point) hit Japan (September 4) and headed for northeastern Russia.  The upper-level circulation of the latter storm, in particular, moved up the west side of the Bering Sea ridge on September 6 and seems to have provided a reinforcing boost for the ridge by transporting huge quantities of warm, moist air up to the region.

Here are the paths of the 3 storms - maps courtesy of Wikipedia. 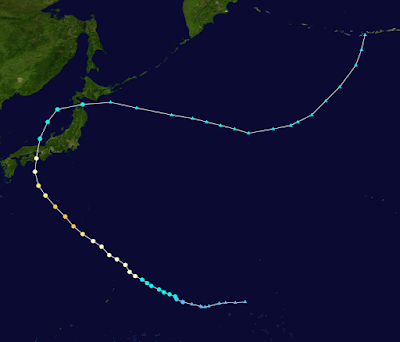 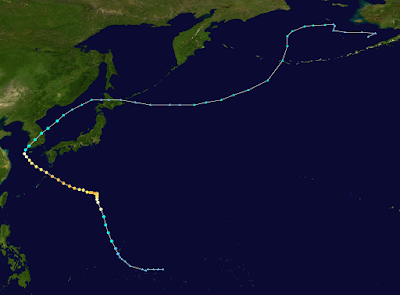 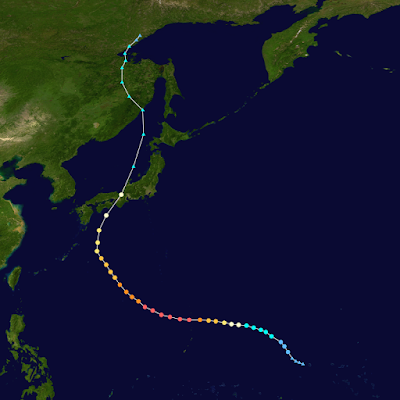 A second contributing factor may be that sea surface temperatures have been far warmer than normal in the northern and western Bering Sea in recent weeks, and this unusual ocean warmth probably helped boost the overall warmth of the atmospheric column and build the ridge in the same area.  Here's an SST anomaly map that Rick Thoman posted on Twitter recently: 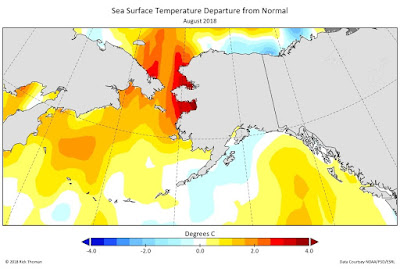 Finally, to illustrate the impacts of the weather pattern, here are a few nice shots of the lovely autumn scene across the state, courtesy of the FAA webcam views on Thursday evening. 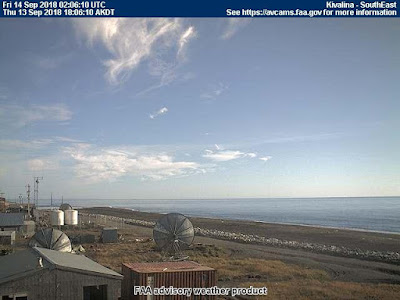 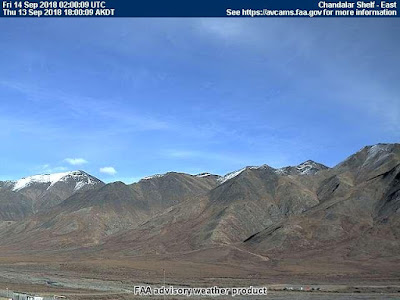 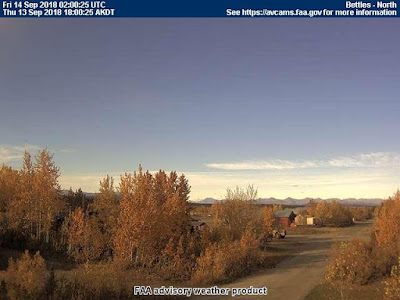 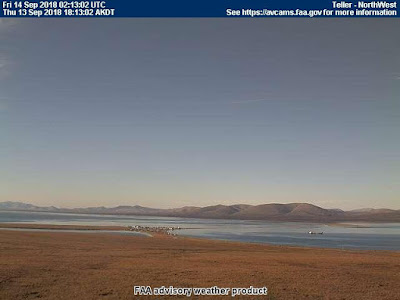 Grayling (on the lower Yukon River) 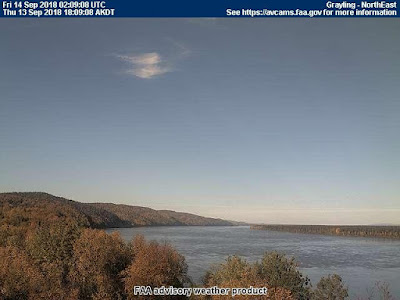 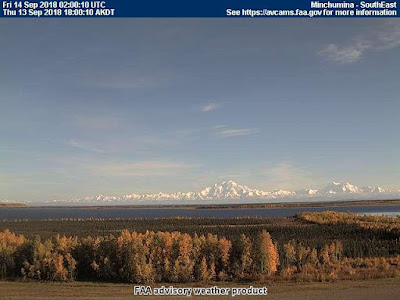 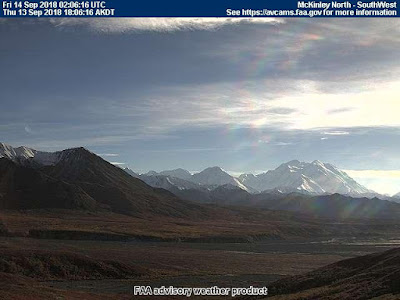 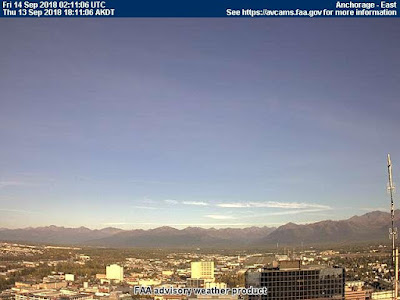 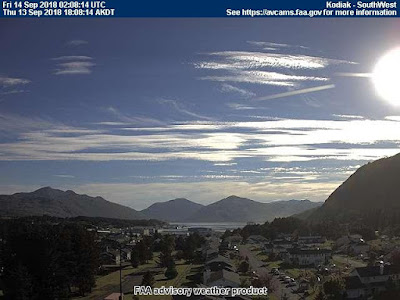 Yakutat (one of the wettest places in Alaska, especially at this time of year normally) 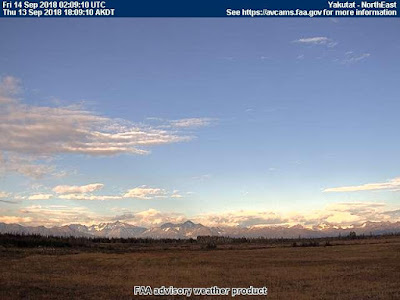 And here's a true-color shot from the Suomi polar orbiter on Thursday afternoon (click to enlarge).  The reddish-brown tundra colors of autumn are quite distinct in the north as well as in higher altitude areas throughout the state. 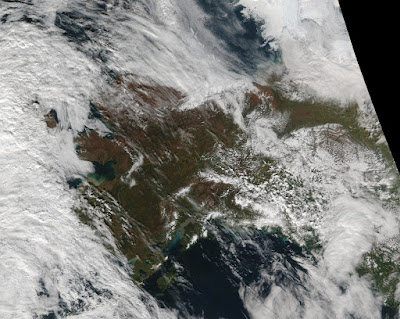