Here's a quick update on the colder reports so far in this notable but not yet extreme cold spell that is reminding much of mainland Alaska what real winter feels like.

Fairbanks airport made it down to -39°F and had a couple of days with midnight-to-midnight high temperature below -30°F, but cloud and light snow brought temperatures back up to near zero today.  Elsewhere in the central and eastern interior it's mostly colder, with -40s hanging on in Tok and the most sheltered valleys of the Fortymile region; and fresh, very cold air is working its way down across western Alaska, with lots of -40 reports showing up late today.  Click below to enlarge.

As is often the case, Chicken has been the "winner" for cold, with a -56°F low temperature reported as of Monday morning. 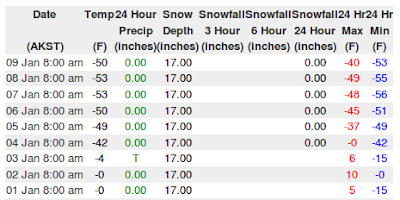 The hourly data from the Fortymile River HADS site at the Taylor Highway showed similar numbers for Monday, with afternoon temperatures rising just a couple of degrees to -50°F.  (As an aside, note the elevation: 1558 feet; this is part of the reason why the narrow valleys of this region get so cold.  Chicken is at 1800 feet.) 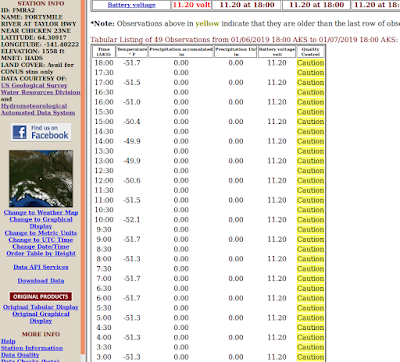 Other sites that have dipped below -50°F are Tok and Fort Yukon.

As impressive as these numbers seem in comparison to the last year or so, we don't have to go back even two years to see colder conditions - the map below shows the minimum temperatures on January 18, 2017 (courtesy of http://xmacis.rcc-acis.org/).  But the next few days may rival this - will someone see a -60°F for the first time in several years? 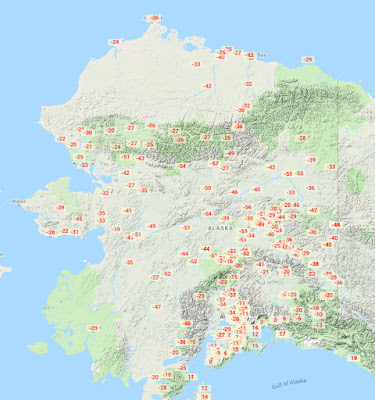