In many previous posts, Rick and I have commented on the seasonal changes in solar radiation that are such a key part of understanding Alaska's climate, and I've also discussed the importance of "longwave" radiation, for example:

As a reminder, "longwave" radiation is the infrared radiation that is constantly emitted and absorbed naturally by all objects, including blog readers and their immediate surroundings at this very moment.  This is in contrast to "shortwave" radiation, which is only emitted in significant quantities by very hot objects like the sun.  The earth's climate system is fundamentally driven by the ever-changing spatial distribution of shortwave radiation from the sun, but longwave radiation transfers between the surface and atmosphere (and out to space) are also a critical part of the energy balance.

I recently took some time to acquire a very nice satellite-derived radiation data set from NASA's CERES project ("Clouds and the Earth's Radiant Energy System").  Based on data from polar-orbiting satellite instruments, CERES provides global coverage with radiation data ranging from hourly to monthly time scales.  With this, we can take a look at how the radiation energy budget works in Alaska and surrounding areas.

First, here's the most tangible element of the radiation transfer - the incoming shortwave at the surface - in mid-winter and mid-summer. 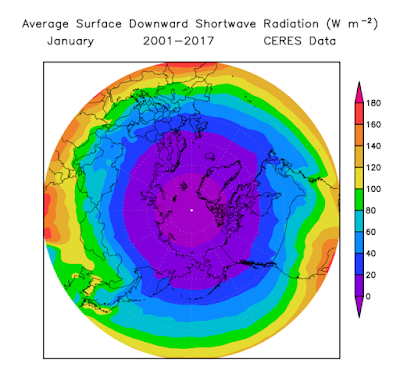 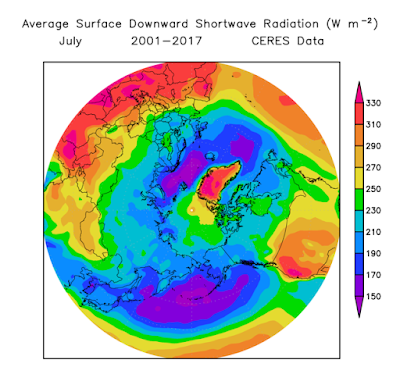 There isn't much to say about winter, but the July map highlights just how cloudy it is across a huge area of the North Pacific.  It's also interesting to note the relative maximum in available solar energy in July over the high Arctic owing to 24-hour daylight.  Of course this is part of the reason for concern over ice-albedo feedback in the Arctic Ocean; as ice extent decreases in summer, the albedo (reflectivity) of the ocean surface decreases dramatically and more solar energy is absorbed.  Here's a map of July average albedo in the CERES data. 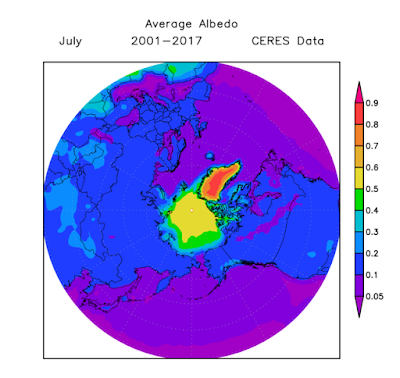 As a result of high albedo in the recent climate, the Arctic Ocean surface absorbs less solar radiation than surrounding land areas, so the net shortwave gain is relatively low: 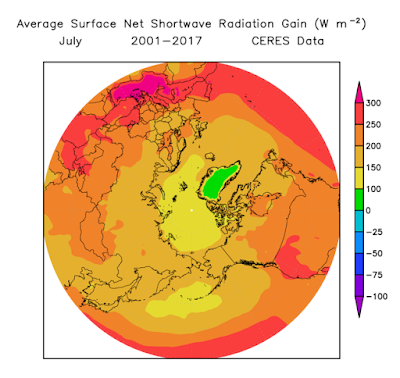 Now let's look at longwave radiation, which is less intuitive but equally important for understanding the climate.  First, the downward longwave; this is the infrared radiation emitted by clouds, water vapor, and other radiatively active gases in the atmosphere like carbon dioxide, methane, and ozone.  The amount of longwave radiation emitted by the atmosphere is closely tied to the average temperature and absolute moisture content (e.g. precipitable water), so a warm and humid air column emits much more than a cold, dry one.  Over Alaska, the coldest and driest atmospheric column is over the Brooks Range in January, but more extreme cold is found over eastern Siberia as well as the high Canadian Arctic. 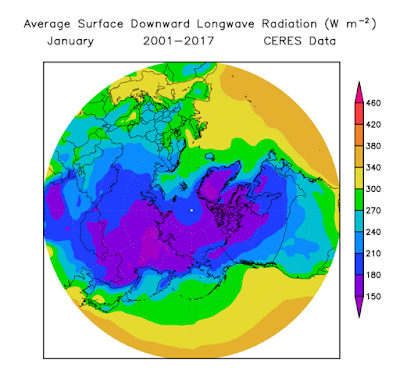 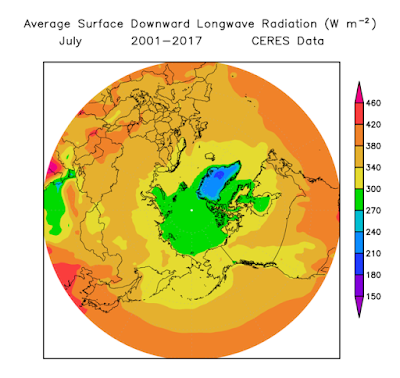 The upward longwave emission from the earth's surface is just a direct reflection of the average temperature of the surface - see below.  The relative warmth of the far North Atlantic (the Norwegian and Barents Seas) in winter is pretty striking. 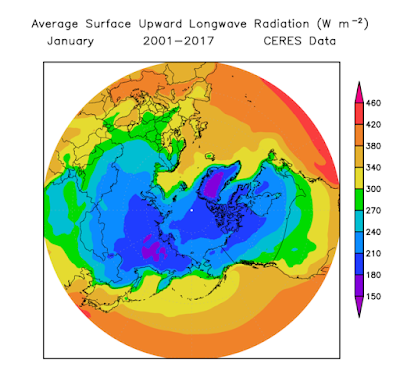 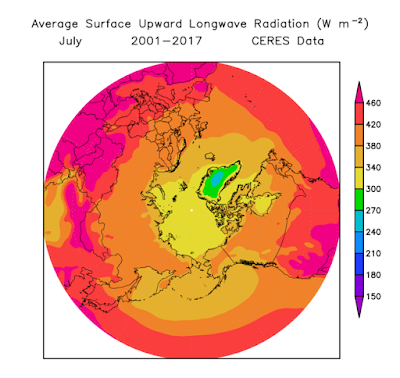 Adding up the downward and upward longwave at the surface gives the net longwave radiation.  The surface loses longwave energy on balance, but much more so in places (a) where it's warmer and so there is more longwave going around, and (b) where clear skies and dry air tend to prevail (more upward than downward emission). 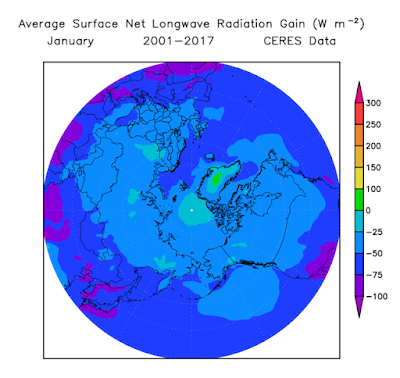 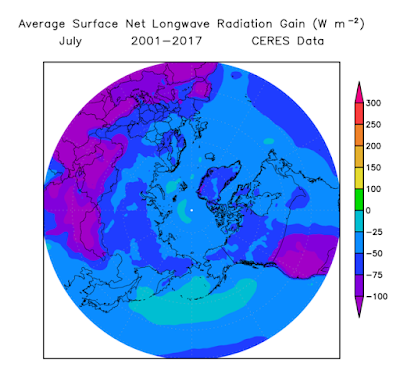 Finally, putting all the pieces together to get the total net radiation balance yields the maps below.  As expected, the high latitudes lose energy via radiation on average in January, with the largest losses found in relatively warmer regions, i.e. over the oceans (even if ice-covered).  But note the relative maximum near the pole, where upward emission is low (thick ice cover and very low surface temperatures) but cloud and moisture aloft (probably derived from the North Atlantic influx) provides a bit more downward radiation than we might expect. 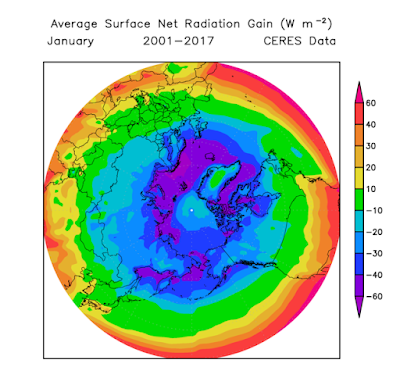 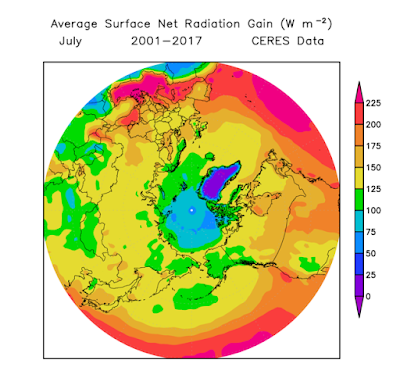 An interesting aspect of the July map above is that much of mainland Alaska gains less energy from radiation overall than the Gulf of Alaska and parts of the Bering Sea; I would not have guessed this, because I would have focused on the sunshine part of the equation.  In reality the ocean surface is colder than the land in summer, so longwave emission is reduced over the water; and the summer ocean has a very low albedo that allows it to capture most of the available shortwave.  Evidently these two factors more than compensate for the higher cloud cover over the ocean - so even though it's cloudier, the ocean near Alaska captures more energy from the summer sun than does the land.

And for a final map, the annual average net radiation gain at the surface.  Apparently the region very near the pole actually gains a small amount of energy over the year - another surprising result. 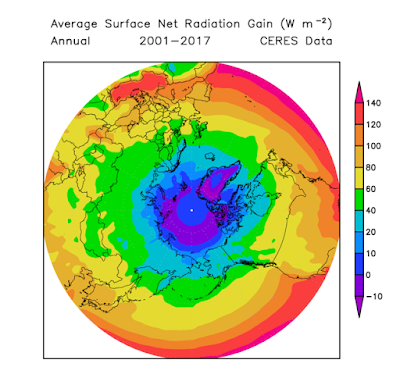 With nearly two decades of CERES data now in hand, I'll plan to take a look at seasonal and year-to-year variations in Alaska in a subsequent post.

Posted by Richard James at 8:59 AM