With temperatures in the interior rising well into the 40s Fahrenheit today - far above normal high temperatures in the 20s - I thought I'd take a look at the Nenana webcam to see how the ice looks on the Tanana River.  The answer is: not good, with a lot of standing water and a dark, rotten appearance that suggests breakup may not be far away despite the incredibly early date.

It seems the folks at the Nenana Ice Classic feel the same way, because the tripod appears to have been hooked up to the contest's clock; the cables that are evident in the webcam view were set up today (click to enlarge the image). 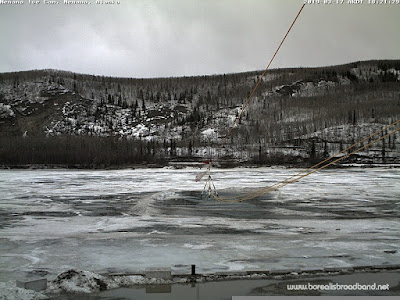 I've watched the Ice Classic's webcam with interest for years, and I'd say the condition of the ice is at least 3-4 weeks ahead of the earliest I've seen it look like this before.  The earliest breakup on record is April 20 - with data back to 1917 - and that's more than a month away from now.  The contest doesn't even close to new entries until April 5th, but I think there's at least a fair chance the ice goes out before then.

Here's a webcam view from more than a month later (April 22) in 2017; that year (and last year) the ice went out on May 1st, which was in line with the long-term normal. 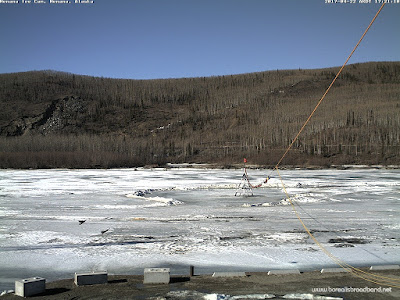 And here's the view during my first time on the ice last year on March 18th.  The rightmost figure is me! 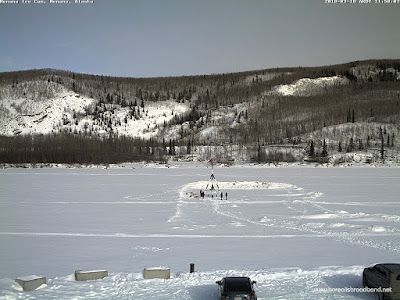 Posted by Richard James at 6:33 PM