Looking back at the mid-winter period of December-February, it was another warm one for Alaska as a whole, although much less so in the southeast of the state than in the west and north, as the graphic below illustrates (courtesy of ACCAP and Rick Thoman, via Twitter). 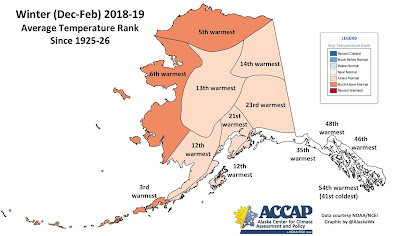 The southeast was relatively cooler because it was located on the east side of the unusual high pressure (ridge axis) that tended to prevail to the south of Alaska; so the flow had a more northerly component than usual in the southeast, but there was a pronounced southerly wind anomaly in the Bering Sea and western Alaska.  The map below shows the departure from normal of the mean 500mb height. 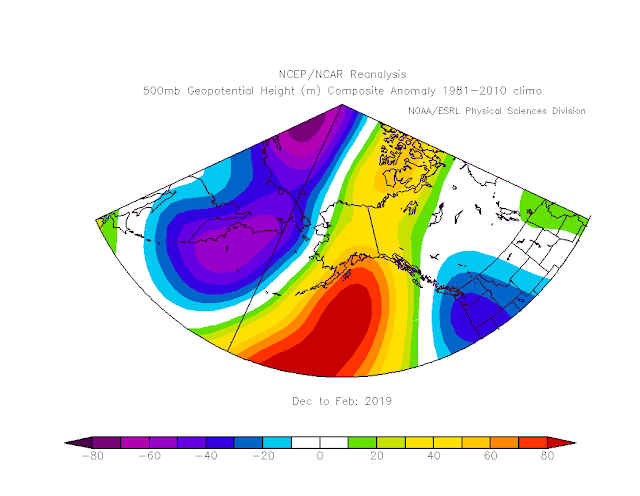 It's interesting to observe that for the second consecutive winter the state has seen significantly higher than normal temperatures (on average) without a significantly positive PDO phase.  Here's a scatter plot of Dec-Feb statewide mean temperature versus PDO index, with the last 6 winters highlighted (click to enlarge). 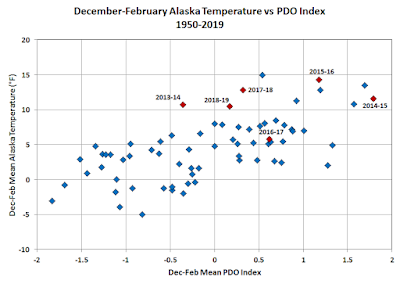 The correlation between PDO index and temperature over the period since 1950 is significant but not very high (R2 = +0.42), and this is partly because of the shifting temperature baseline; Alaska's winter temperatures have become warmer than they used to be for the same PDO pattern.  If we create a simple linear regression model based on temperatures and PDO from 1950-1999, we find that every one of the last 20 winters has been warmer than the pre-2000 regression would suggest (see below).  This is compelling evidence that changes in the PDO don't explain recent warmth (unlike for example the sudden winter warming that occurred in Alaska in 1976 in tandem with a major PDO regime shift). 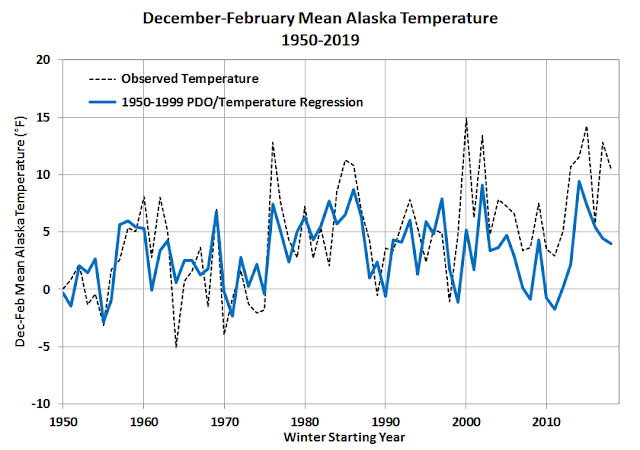 In light of these results, I thought it would be interesting to explore the "attribution" of winter warmth a bit more using 500mb circulation patterns.  The idea here is that seasonal mean temperatures are strongly affected by changes in atmospheric flow patterns, and so the question arises as to how much of (a) interannual temperature variance, and (b) long-term trend, can be explained just by flow patterns?

Essentially the same topic was explored in some detail by UAF's John Walsh, along with Brian Brettschneider, Rick Thoman, and others, in a 2017 paper that is well worth a read:

In the paper, Walsh et al used historical pattern analogs to estimate the contribution of the flow pattern to temperature variations in one particular winter (2015-16).  I've taken a different tack by calculating the correlation of Alaska Dec-Feb temperature to 500mb heights on a latitude-longitude grid; the result is below.  Note that I removed the linear trend from both temperatures and heights prior to doing the calculation. 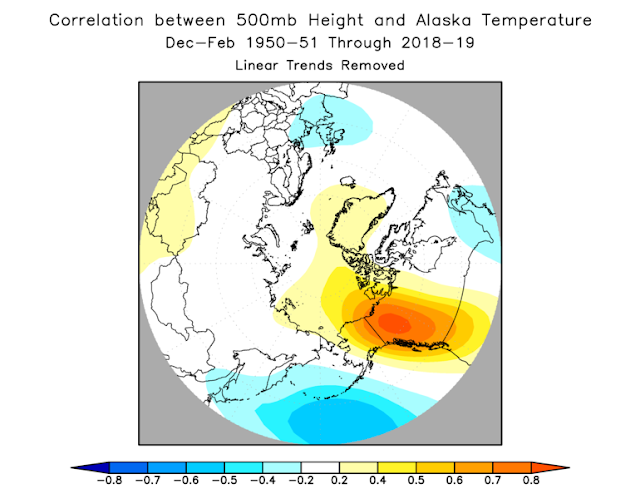 The peak correlation (R2 = +0.70) is found over northwestern Canada, where higher 500mb heights are strongly connected to warmer Alaska temperatures in winter.  Of course this is simply because a ridge over western Canada, and a trough near the Aleutians, produce unusual southerly flow across most of the state.

Using this correlation result, I constructed an index to describe the temperature-relevant flow pattern by projecting each winter's 500mb height anomaly onto the R2 field across the Northern Hemisphere north of 45°N.  The resulting index is correlated with (detrended) Alaska temperatures at R2 = +0.74, so we can say that the flow pattern explains about 75% of the winter-to-winter variance in temperature.  Here's a scatter plot of observed (detrended) Dec-Feb temperature versus the prediction from linear regression with the 500mb circulation index.  As in the PDO plot, the last 6 winters are highlighted, and again we see that recent winters have been consistently warmer than the regression would suggest. 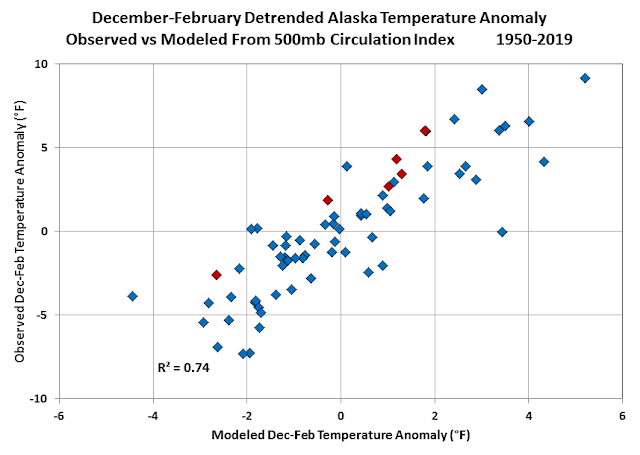 Now here comes the interesting part.  If we calculate each winter's circulation index with the non-detrended 500mb height pattern, we obtain an estimate of the actual (non-detrended) contribution of the circulation to temperature variations throughout the history.  It's no surprise to find that the circulation index has become more favorable to warmth over time, so the modeled temperature has a rising trend - but not nearly as much as the actual temperature, see below.  Once again it's clear that the last 6 winters have been consistently warmer - and often much warmer - than the 500mb circulation would suggest. 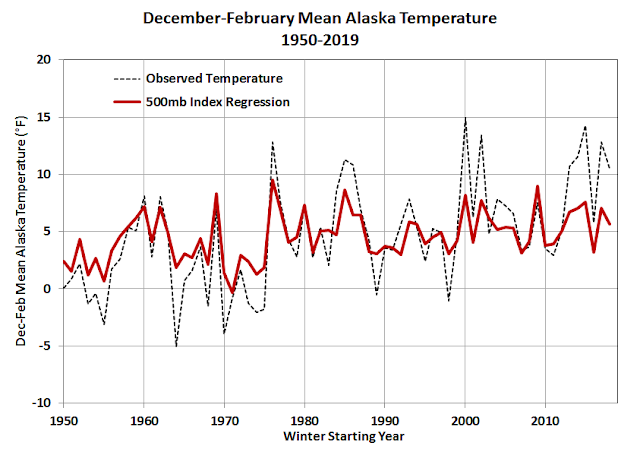 Subtracting out the circulation's influence from each winter's temperature results in an estimate of what the temperature history might have looked like if there had been no variation at all in 500mb flow patterns (taken in isolation, of course; the ocean-atmosphere system is all interconnected in reality). 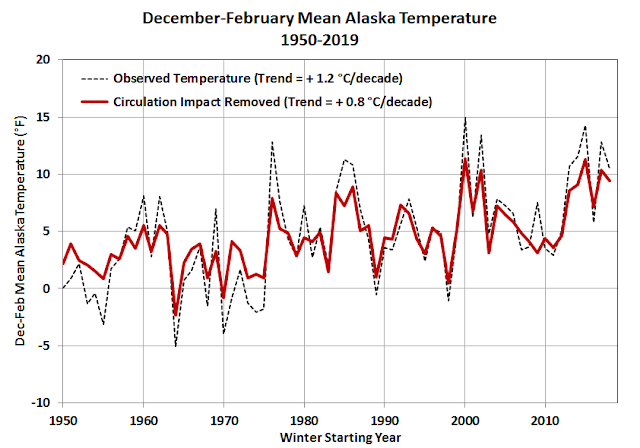 Using this simple method, it seems that the circulation anomalies explain about one-third of the warming trend that has occurred since 1950; the rest can be attributed to broader warming trends, especially in the high latitudes, including higher sea surface temperatures near Alaska and of course reduced sea ice extent.

Going back to the 2017 paper by Walsh et al, they concluded that less than half of the anomalous warmth in winter 2015-16 can be explained by the atmospheric circulation, and my results here are consistent with this.  The 3 months of Dec 2015 - Feb 2016 were 9.7°F warmer than the 1950-2018 mean, but the 500mb index regression suggests only 3.0°F of anomalous warmth that winter.  Like this winter, the flow pattern of 2015-16 really wasn't all that favorable for extreme warmth in Alaska, with not much of a ridge over northwestern Canada - see below - although the PDO was much more positive than it is now. 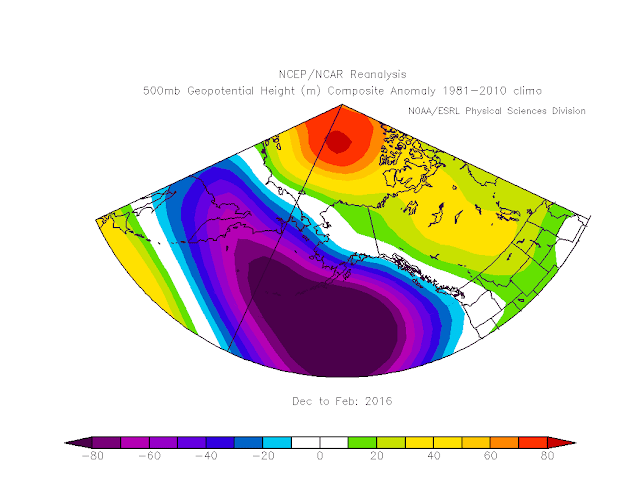