Veteran Alaska climate expert Rick Thoman delivered the latest in his longstanding series of monthly climate outlook seminars today at UAF, providing all the ins and outs of the seasonal forecast for the next few months in Alaska.  Here's a link to the presentation slides; it contains a wealth of information and is well worth a look.

The bottom line from the seasonal outlook is that the probabilities favor a warmer than normal summer across the entire state, and there's a tilt towards above-normal rainfall in all but Southeast Alaska and the Alaska Peninsula and Aleutians.  In this context, "normal" is defined by the 1981-2010 period, so the ongoing exceptional warmth in the oceans surrounding Alaska is a major impetus for the warm forecast.

After enjoying Rick's presentation, I was reminded of a curiosity that I noticed a few weeks ago involving an apparent connection between late summer rainfall in northwestern Alaska and the phase of the QBO.  The QBO (Quasi-Biennial Oscillation) is a slowly-evolving, semi-periodic fluctuation in winds up in the stratosphere above the equator.  These winds shift from westerly to easterly and back again on a timescale of a couple of years.

Now you might well ask what stratospheric winds above the equator could possibly have to do with Alaska weather, and if you did, I wouldn't be able to give a good explanation.  According to my very limited understanding, the QBO phase is thought to affect the way in which large-scale waves propagate around the globe at higher latitudes and in the troposphere; the details have to do with atmospheric wave physics, but I believe there's still considerable debate about the detailed mechanisms.

Fortunately we don't need to understand the QBO to know that it exists and is predictable, and to see the historical relationship with weather at ground level.  For example, here's a map showing the July-August precipitation pattern for years with a strongly positive QBO: 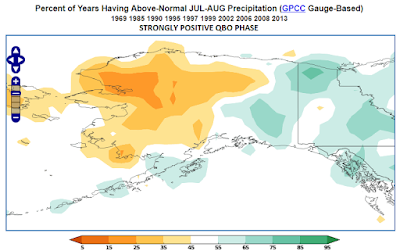 And here's the analysis for the negative phase: 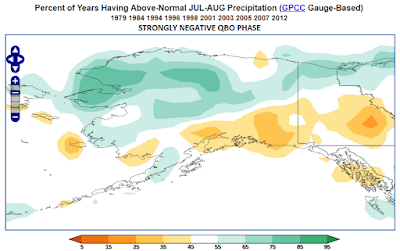 The QBO is currently strongly positive and is likely to remain so for a few more months, so this obviously favors a drier July-August period in northwestern Alaska. 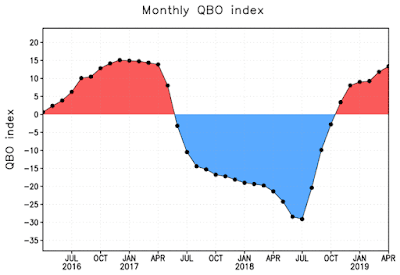 Below are scatter plots of the full joint distribution of QBO and July-August precipitation at Kotzebue and Bettles since 1979.  I won't claim the relationship is "strong", but it is statistically significant.  Note that the two wettest July-August periods on record in Kotzebue (2012 and 1994) also had the most negative July-August QBO on record (the two points are almost on top of each other on the chart).

So it will be interesting to see if the QBO influence shows up later this summer in the northwest; or will CPC's expectation for wetter conditions prove more reliable? 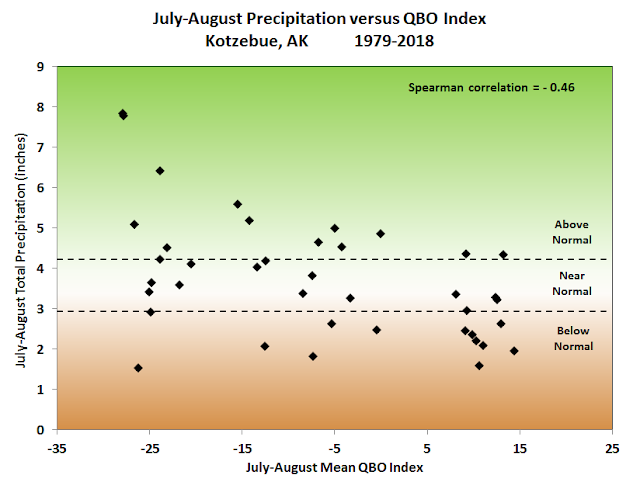 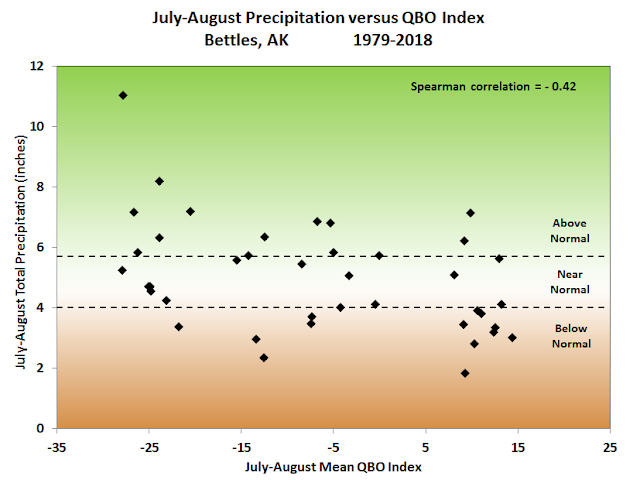