The weather has been wild in western, southwestern, and south-central Alaska in the past few days, as an upper-level trough has deepened over the eastern Bering Sea and western Alaska.  This feature, and the associated cold air, bears some relation to the Arctic vortex that delivered last week's interior cold snap; it appears that a lobe of the Arctic air mass settled down over western Alaska, and the clash with North Pacific warmth farther south set up a stormy situation yesterday.

Here's the 500mb chart from 3pm yesterday, showing a very sharp trough over western Alaska.  The eastward kink at the southern end is very indicative of a strong surface-level cyclone.  Click to enlarge: 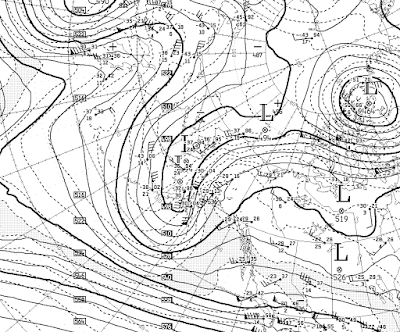 The surface analysis from 3am today (see below) shows the path of the 972-973mb surface pressure center, which tracked right up Cook Inlet yesterday evening. 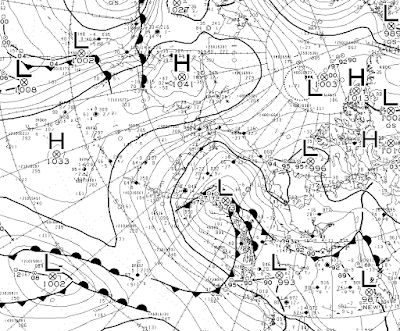 The impacts on the south-central population were substantial: about 10" of snow in Anchorage, 21" in Girdwood, and a closed Seward Highway.  Very sadly, the storm also led to the loss of a crabbing vessel near Kodiak Island:

From a meteorological perspective, one of the most striking aspects of yesterday's events was the intense temperature contrast across the system.  While Bethel was shivering in windy sub-zero conditions, Anchorage saw a record high of 46°F before the cold air arrived in the evening.  The difference in daily high temperatures between Anchorage and Bethel was a remarkable 56°F, and this is nearly the greatest on record (59°F on Dec 23, 2004).

The map below illustrates the situation at noon: 46°F in Anchorage, 39°F and raining at McKinley Park, but with very cold air advancing from the west.  Notice the 21°F and windy at Akhiok on Kodiak Island; the waters west of the island would have been very rough, and icing may have been a significant issue.

Here's the situation 8 hours later: down to 0°F at McKinley Park and 18°F in Homer.

The frontal passage was especially striking at McKinley Park, where the temperature dropped from 39°F to 10°F in just 15 minutes as the wind direction changed from southerly to northerly. 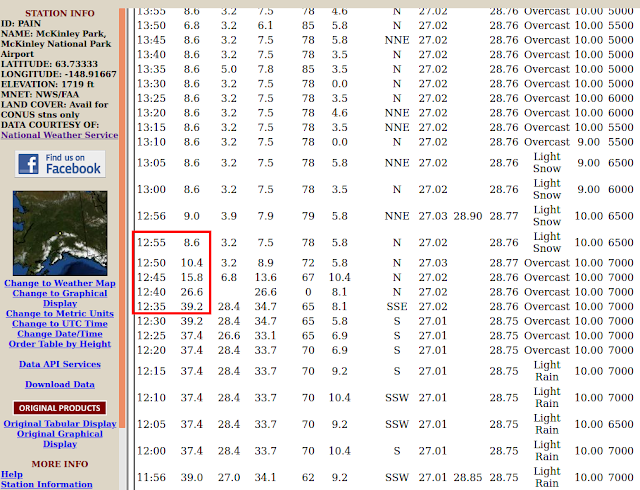 Anchorage also saw a sudden temperature drop in early evening: 15°F in less than an hour. 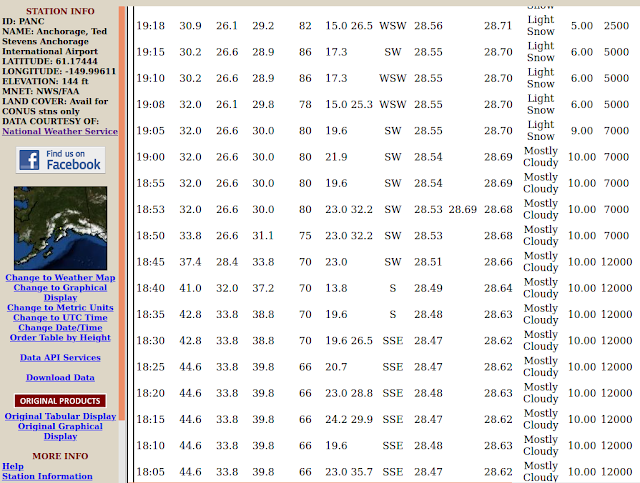 One bright side of this cold blast over western Alaska and the Bering Sea is that sea ice growth will be vigorous; but that may be "cold comfort" for residents of the west.  Bethel has seen a daily average wind chill below -30°F for all but one of the last seven days, and up in the northwest, Kivalina is this evening enduring its second 60+mph ground blizzard in 48 hours.  Sounds like real winter.