Unusual cold has settled in over Alaska in recent days, and most of the state is now seeing significantly below-normal temperatures; and given the date on the calendar, this is pretty cold.  Temperatures near or below -40°F/C have developed over a wide region, and the colder spots are around -50°F from the interior North Slope to the Yukon Flats to the western interior.

The statewide nature of the chill is illustrated by UAF's temperature index, which combines standardized temperature anomalies from 25 stations; the latest update (see below) shows that the latest cold wave has brought a larger statewide anomaly than the cold snap just after Christmas.


The coldest conditions relative to normal have been in the southwest of mainland Alaska, and in this area there was really no break between the first and second cold waves.  For instance, as of today Bethel has been continuously below 0°F for 15 straight days.  The record is 26 days below zero, and this is not a historically cold spell for Bethel (contrast with January 1989), but it's the coldest since the winter of 2011-2012.  Today may be the coldest day so far, with a high temperature through 6pm of only -20°F.

Also of note was last Thursday's remarkable low temperature of -41°F in King Salmon on the north end of the Alaska Peninsula.  This actually beats the 2012 cold spell, as King Salmon hasn't dropped below -40° since 2006.

Perhaps equally impressive in the context of recent warm winters, Anchorage has seen four straight days with a low temperature of -9°F or below.  The six winters from 2013 to last winter only mustered five such days in total.

The change to cold conditions in Alaska is obviously a dramatic turn-around from the pervasive warmth of recent months and years, and it will be interesting to see how long it lasts.  At the moment Alaska is one of the coldest places in the Northern Hemisphere relative to normal, and this is a stark contrast with the 5-year tendency for Alaska to be a hemispheric "hot spot".

Of course with cold locked up over Alaska and the high Arctic, most other parts of the middle and high latitudes are unusually warm; and it's worth pointing out that hemispheric average temperatures are no colder this winter.  Alaska is just seeing a lucky (or unlucky, depending on your viewpoint) break from the recent trend.  To demonstrate this point, the chart below shows the fraction of the Northern Hemisphere's area in which the 850mb temperature is below -5°C; it has been running close to record lows in recent weeks. 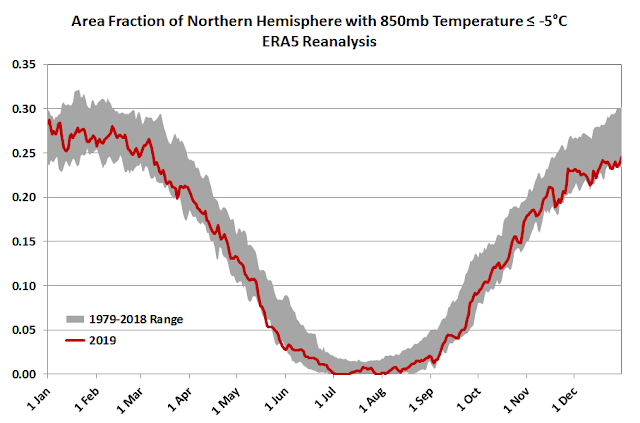 Read more about this metric for measuring the hemispheric winter cold pool here: