As is only fitting, winter is coming to an end with another spell of unusual cold in much of Alaska; here are a few notable reports from the past several days.

In Fairbanks, March is ending as the fourth month in a row with average temperature below the 1981-2010 normal, and it's the coldest first quarter of the year since 2007.

March was also a very snowy month in Fairbanks, as Rick Thoman illustrated nicely in the following plot (via Rick's Twitter feed); click to enlarge. 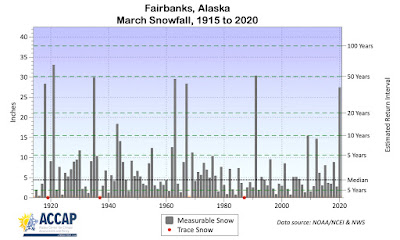 With 27.5 inches of snow, March was the snowiest month of the winter in Fairbanks.  Since the winter of 1929-30, this has happened 8 times before, so it's unusual but not rare.  Average (median) March snowfall is less than 5 inches, but it's a very skewed distribution, with occasionally much more occurring. 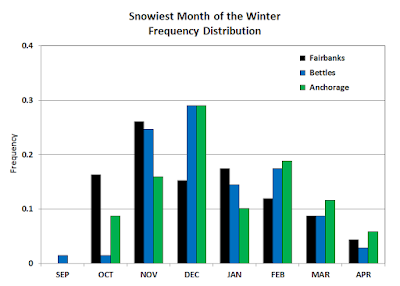 Other interesting features of the chart include the notable November-December peak in Bettles, and the enhanced frequency in late winter (February through April) in Anchorage.  Surprisingly, March has more often been the snowiest month than January in Anchorage, and average March snowfall lags only very slightly behind January.  I suspect part of this is an artifact of sampling variability, but there may well be a physical reason why January tends to underperform for snow; I don't think it's as simple as "it's too cold to snow", but if readers have any ideas, I'm all ears.