Unusual cold is hanging on with remarkable tenacity in Alaska this winter, and last night saw temperatures worthy of the depths of winter in many locations.  Here are a few examples of notable low temperatures today:

Here's the temperature trace from the past two weeks at Smith Lake (UAF's North Campus).  The temperature did not break -10°F today, which is pretty impressive for the time of year.

Of course clear skies at this time of year produce large diurnal temperature ranges, as seen in the Smith Lake data.  The Chalkyitsik RAWS (about 20 miles east of Fort Yukon) often produces spectacular examples, and just the other day this site saw temperatures vary from a low of -49°F on two consecutive nights to a high of 0°F in the intervening day.  When looking at days with a high temperature of 0°F or below, this is the largest diurnal range on record for the site (data since 1997).

The chart below shows daily Chalkyitsik temperatures so far this winter, as compared to seasonal normals (obtained from the 1997-2018 history). 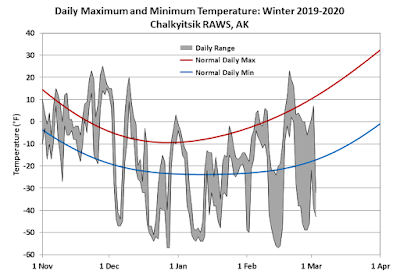 Two features are striking: the persistence of unusual cold since mid-December, and the expansion of the daily temperature range since early February.  The latter is entirely in keeping with climatology, which shows a pronounced rise in the average diurnal range in late winter; in fact it's remarkable to see the normal high temperature bottom out very soon after winter solstice, while the normal low temperature doesn't show any meaningful rise until well into February.

Posted by Richard James at 6:44 PM