After commenting on Friday that lightning activity has been relatively subdued from Fairbanks east so far this season, strong thunderstorms have been popping up in the hills around Fairbanks since the weekend.  The NWS in Fairbanks has issued special statements each day since Saturday to advertise the risk of heavy rain, small hail, and frequent lightning, and as Rick Thoman noted, Fairbanks airport has already reported thunder on 7 days so far this season.  This is tied with 2018 for most on record for so early in the season; the record for an entire season appears to be 1992, with 17 days of thunder.

The most notable storm for some local residents occurred on Saturday afternoon, when intense convective cells moved westward across Eielson AFB just before 5pm.  Here's the radar appearance of the storms at 15-minute intervals on approach to Eielson. 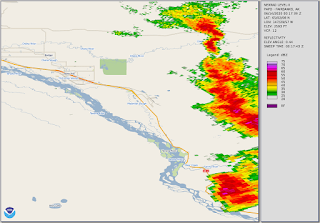 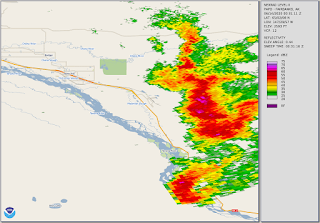 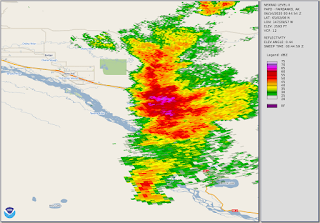 The Eielson ASOS reported 0.78" of rain, including 0.58" in 14 minutes, which is a healthy 2.5"/hour rainfall rate.  The return interval for experiencing such a high 15-minute rainfall amount at Eielson is greater than 50 years, so this was a storm of rare intensity in terms of rain rate.  However, other aspects were not too remarkable: the peak wind gust was 43 mph from the northeast, and the temperature dropped from 75°F to 54°F.  It appears no hail was reported at the airport, which is a bit surprising in view of the intense radar
signature of the storm as it passed over the base.

Here's an animation showing the evolution of the storm system over a longer period.

Another example of a strong storm occurred the previous day (Friday); this one formed just to the northeast of Fairbanks and dropped south across Chena Hot Springs Road at about 3pm.

It's fascinating (to me) to reflect on the extreme opposites of atmospheric stability that occur in Fairbanks-land at opposite ends of the year.  Six months ago, with effectively zero solar heating, the valley-level atmosphere was profoundly stable, with a near-permanent surface-based temperature inversion.  Now, with daily solar radiation often rivaling locations much, much farther to the south, episodes of intense instability allow these strong thunderstorms to develop.  The atmospheric physics and the sensible weather could not be more different.

Posted by Richard James at 5:09 PM