Following on the heels of last weekend's Brooks Range chinook, a much more significant warm event has unfolded across much of the state in the past few days, with deep and strong flow from the south rather than low-level flow from the north.  Here's the 500mb setup at 4pm AKDT on Friday; the big western Canada ridge and Bering Sea trough are classic for a warm surge into mainland Alaska. 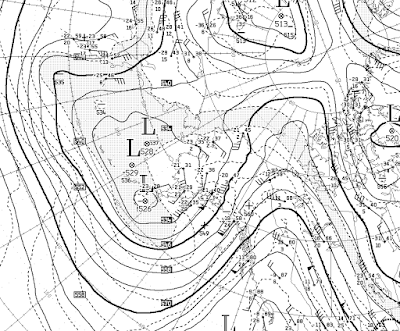 The result has been one of the most notable warm episodes on record for the time of year; Fairbanks has exceeded 60°F for the past 4 days, with 68°F on Thursday and 66°F on Friday.  This is only the 4th year since 1930 with 65°F or higher in Fairbanks in October.  It's also the first time since the 1930s that Fairbanks has seen a daily low temperature above 45°F after September (the low was 47°F on Friday).

In terms of departure from normal, Friday's mean temperature anomaly of +22°F was one of the largest daily departures from normal on record prior to mid-October.  The greatest, of course, occurred in the extreme chinook of September 1995, when a low temperature of 65°F occurred on the 20th of the month, followed by a high of 78°F the next day.

Readers may recall that I mentioned the 1995 event in this post back in July, when I noted that 1995, like this year, saw its highest temperature of the year in May.  It's interesting that 2020, like 1995, has produced highly unusual warmth in both May and in mid-autumn, while some of the major global climate drivers are similar (developing La Niña during summer, a very warm North Atlantic, and a very active Atlantic hurricane season).

Here's a look at high temperatures on Thursday the 1st (click to enlarge).  That's a lot of 60's, including at Chicken in the southeast interior; the co-op site (not shown here) had 61°F, which is only the second time with 60s in October (previously 64°F on Oct 2, 2003).

And the following map gives a sense of the scale of the departures from normal, based on gridded model data: 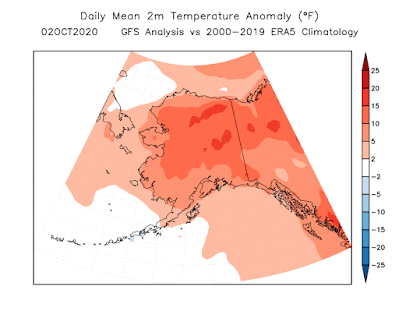 Finally, what if the similarity with 1995 persists?  Then we would expect a cold start to winter in the interior; the winter of 1995-96 was colder than normal through January, particularly in eastern and southeastern Alaska.  January was particularly cold in the southeast, with Northway seeing a monthly mean temperature of almost -30°F: about the same as last year, in fact.  Juneau also had their coldest January of recent decades in 1996. 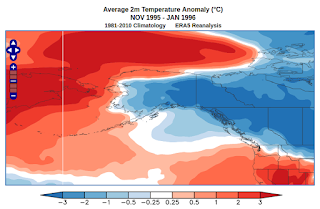 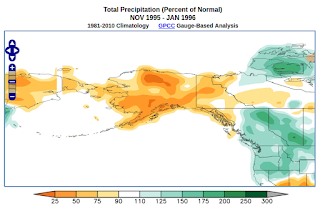 Posted by Richard James at 5:51 AM