Exceptionally warm weather has continued across interior and northern Alaska, with Fairbanks currently sitting at the 3rd warmest start to October on record (1930-present); only 1969 and 2003 were warmer.  As of today, the normal daily high temperature is 36°F, but the coldest day so far this autumn was only 42°F back on September 24.  The average high temperature so far in October has been 56°F.

Fairbanks airport also hasn't seen even a flake of snow, and we're two and a half weeks past the date when that normally happens.  The median date for first snow is September 22, and about 85% of years receive measurable snow on the ground by October 10.  However, it looks like the white stuff will arrive next week, so the record for latest first flakes (October 20 in 2018) won't be threatened.

One might be tempted to think that such a warm spell in late autumn would portend a mild winter, but in fact there's a slight inverse correlation between September and subsequent November-March temperatures in the interior.  And as I mentioned a couple of weeks ago, with La Niña under way in the tropical Pacific, a cold winter is more likely than a warm one in interior, southern, and southeast Alaska.

Speaking of La Niña, the latest guidance from long-range forecast models has become considerably more bullish, and it's looking increasingly likely that this La Niña will end up as one of the stronger events of recent decades.  The models have also come into dramatically better alignment on expected cold for much of Alaska; here's the latest multi-model ensemble mean anomaly for January-March, which has the coldest 3-month period in the forecast. 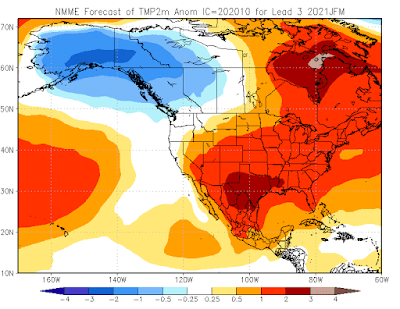 The inter-model agreement is unusually good, as all of the models are now being heavily influenced by the La Niña forcing (see below).  One comment on this: confidence in the forecast is not as high as this agreement would suggest, because much depends on the evolution of the Arctic Oscillation and other high-latitude patterns, and these are much less predictable than the standard La Niña influence.  The models are good at showing the overall influence of La Niña, so they inevitably look similar in these situations, but other aspects of the winter circulation pattern can easily modify the outcome at middle and high latitudes.

It's really very interesting that the forecast for the upcoming late winter period (January through March) looks very similar indeed to the outcome last year across most of the extratropical Northern Hemisphere - compare the two maps below.  There's remarkable similarity across the North Pacific domain in particular, but of course the tropical Pacific is much different: last winter wasn't a La Niña at all, as we noted at the time (see here), but it looked a lot like a La Niña outcome in Alaska. 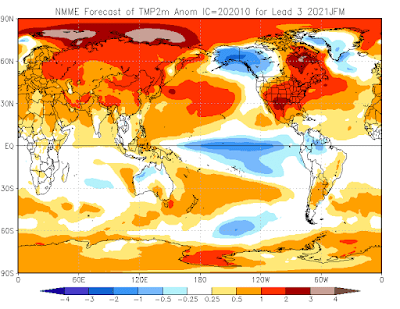 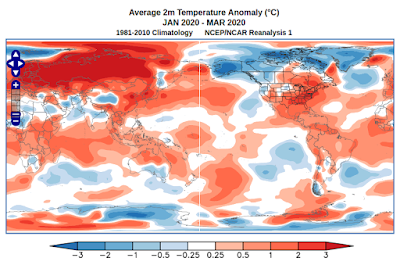 For reference, here's the January-March temperature anomaly in 10 strong La Niña events of the past. 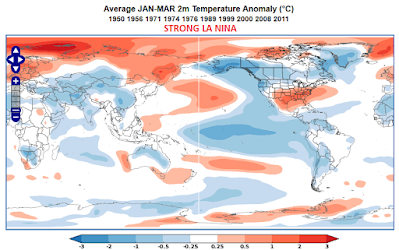 Finally, the maps below show the monthly progression of NMME forecast maps.  Note that the cold signal doesn't come into play at all until December, and it peaks in February.  But as noted above, this is just the model signal, influenced mainly by the La Niña forcing; don't put too much faith in it, as there will inevitably be much more variability from month to month. 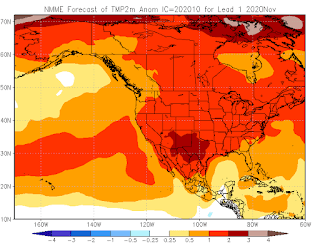 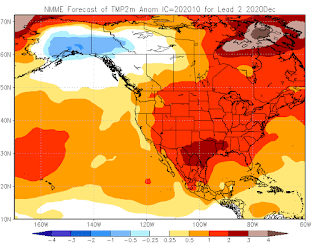 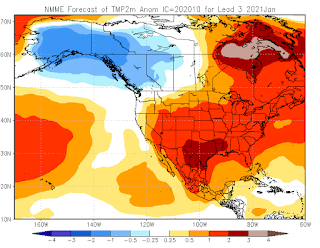 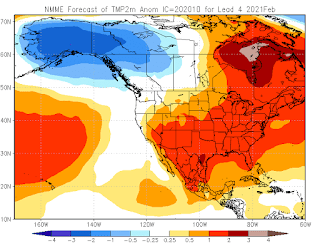 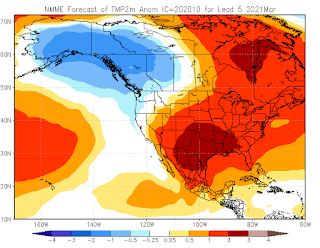 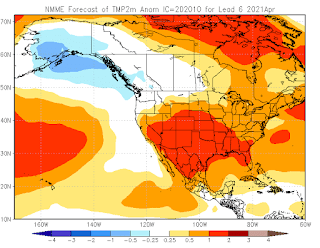