Harsh cold is persisting at many interior locations and also across the Brooks Range and North Slope, with numerous -40°F to -50°F readings this morning, and some even colder.  Notable low temperatures in the past couple of days include:

-49°F at Galena in the western interior

-58°F on the upper Sagavanirktok River

The latter is apparently the coldest observed in Alaska so far this winter; Chicken reached -57°F a couple of days ago.

Looking at the surface analysis from 3pm yesterday, we see the same Arctic high pressure system that I highlighted in my last two posts - except now the high has expanded over an enormous area from the Chukchi Sea to northwestern Canada and across to Greenland.  It's really a sight to behold: click to enlarge. 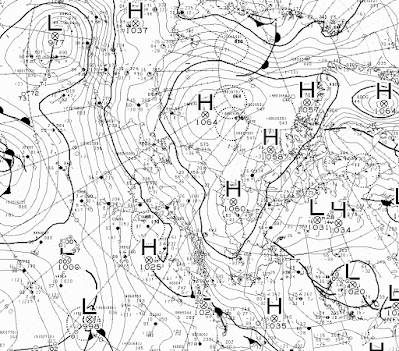 The all-time record highest MSLP over the Arctic Ocean is 1069mb (per ERA5 data since 1950), so this is not far off.  It's a rare anomaly, and it's responsible not just for the cold in Alaska, but for outbreaks of severe cold far to the south in the lower 48 and also in Europe.