My post from a couple of weeks ago about cold on the North Slope elicited a comment from a reader about the origin of the very low temperatures.  Specifically, the comment asked whether it was accurate to suggest that the cold was imported from farther north in the Arctic; my post stated that high pressure was acting to "funnel very cold air into northern Alaska".  Surely, the reader asked, Alaska's cold develops in situ when there's no competing warm influx to prevent it.  After all, there's not much severe cold over the Arctic Ocean these days, so how can the North Slope cold have its origin farther north?

The answer to this question is that both ideas have validity.  Valley-level surface cold across interior and northern Alaska certainly is generated locally when conditions are right (clear skies, calm winds), but it's also true that surface conditions are powerfully influenced by the thermal quality of the large-scale air mass.  When it's warm aloft, temperatures at the surface are usually warm and are never severely cold; but when it's cold aloft, then the surface is usually very cold and is rarely warmer than normal.

The overall correlation can be illustrated with a scatter plot of December-February 850mb temperatures and daily minimum temperatures at Fairbanks: 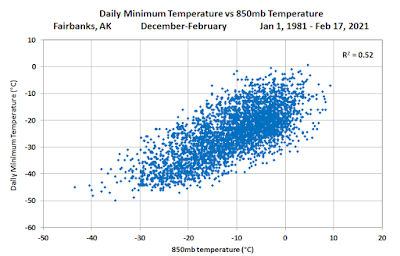 The correlation with temperatures higher up in the atmosphere is smaller, of course, but it's still significant. 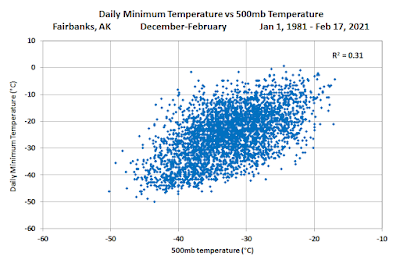 Similarly, the recent cold spell at Umiat (as low as -56°F 10 days ago) was associated with colder than normal conditions aloft.  The chart below shows the rather close correspondence of surface and 850mb temperatures in the past several weeks - but note that I've used upper-air data from the nearest sounding site at Utqiaġvik, about 170 miles to the northwest. 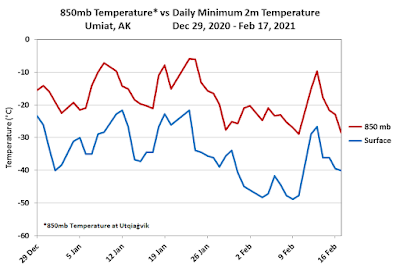 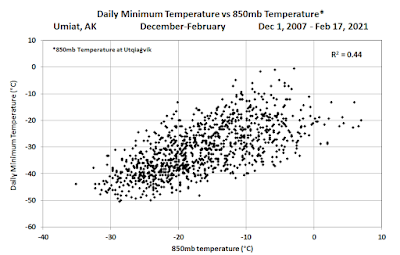 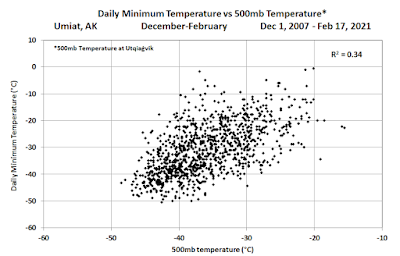 I also looked at the correlations in terms of daily departure from normal, rather than absolute temperatures - see below.  As it turns out, it makes very little difference in this analysis. 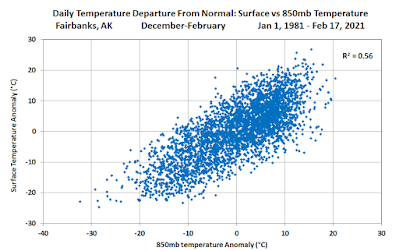 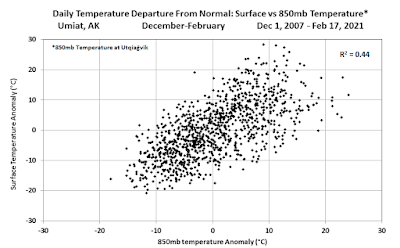 To summarize, historical data show that about half of the variance of winter daily temperature is explained by the temperature of the air aloft, which in turn is largely dictated by the source region of the air mass.  So while it's fair to say that Alaska's cold can be greatly amplified in situ - for example under a strong inversion with clear skies and calm winds - the coldest episodes are never just home-made; you need both cold air aloft AND favorable surface conditions to take the thermometer down to its lowest levels.

Posted by Richard James at 8:22 AM