It's been a while since I posted anything on Arctic sea ice, but it's worth looking back at the melt season now that freeze-up is well under way.  It was a relatively cool and cloudy summer with lower pressure than normal across the Arctic Ocean, and sea ice melt was somewhat reduced compared to the past decade or so.  Here's the September sea ice extent, courtesy of NSIDC: this year's seasonal ice minimum was notably higher than the lowest values of the modern era, but of course still much lower than earlier decades. 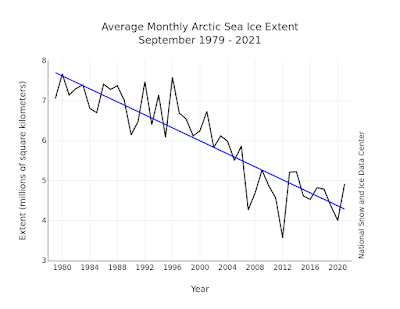 On a regional basis, sea ice melted out extremely early this year in the Laptev Sea, but the summer weather pattern - with an unusual trough of low pressure to the north of Alaska - allowed ice to last much longer than in recent years in the Chukchi and Beaufort Seas.  NSIDC's write-up also notes that last winter saw increased transport of old, thick ice into the Beaufort Sea, and that ice is resistant to summer melt.  Here's a paper on last winter's unusual ice transport. 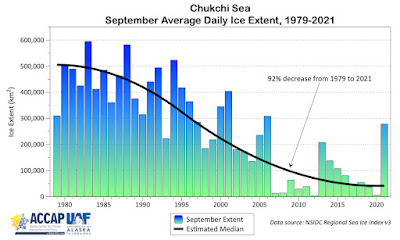 It's also interesting to note that the Northeast Passage appears to have been open for only about five weeks this year, which is a huge change from last year.  Judging from daily ice extent images from NSIDC, August 22 - September 27 was the window in which there was an opening in the ice next to Russia's Taymyr Peninsula.  Last year the window for open navigation was approximately July 15 - October 29, or well over three months!

Looking back at recent years, the last time the Northeast Passage closed up as early as this year was 2013, and all other years since 2007 saw open water along the entire route into October.  2007 was the last year in which there was no opening all summer, again judging from the NSIDC images (which can be found here).

Here's my estimate of the closing dates for the Northeast Passage, i.e. the last date with an open route from the Atlantic to the Pacific near the coast of Russia, based on NSIDC sea ice extent (defined as ice concentration greater than 15%).

Posted by Richard James at 4:21 AM