Will The Snow Survive?

The heavy, wet snow that fell at the weekend left several inches on the ground in the Fairbanks area, which of course is unusual for the time of year.   Fewer than 1 in 5 years have snow on the ground at valley level in the first few days of October, although it doesn't take much of a memory to recall the remarkable late September snowfall in 2015.  Back then over 13" of snow fell, which is more in line with what happened this time at locations to the southeast of Fairbanks.

It's interesting to ask whether this very early snow cover will last through the winter.  In 2015 it didn't: it was all gone by the middle of October.  It's tough to keep a relatively shallow early snow cover, as the temperature in Fairbanks reaches at least 45°F after October 5 in most years, and 50°F or higher is not at all uncommon.  In fact, if this year's snow does last, it will be the second earliest onset of the winter snow pack on record (1930-present); 1992 holds the record of September 13, but that was a very extreme outlier.

So from a statistical perspective it looks like there's now a decent chance the snow will last, but it's obviously highly contingent on the weather.  Above-normal temperatures of any magnitude will probably doom the early snow cover, and rain - which is in the forecast for the next couple of days - may also prove fatal.

Here's the afternoon river view at Nenana, with the relatively unusual situation of having ice (snow) on the ground but not on the river.  Most of the year has ice cover on both or neither, and typically April - and sometimes much of May - has ice only on the river. 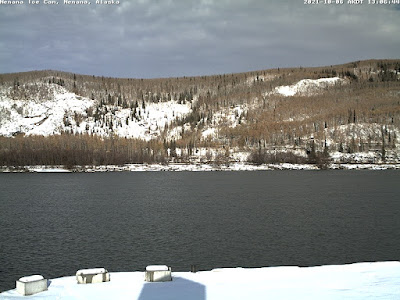