Monthly data for December are finally in, so here's a quick look back at that outstandingly unusual month in Alaska climate.
Large departures from normal were driven by an extremely strong ridge centered just to the south of the Aleutians, combined with a strong and persistent trough downstream over western Canada.  This atmospheric pattern reflects a strongly negative phase of the "Pacific/North American pattern", which is correlated with the (oceanic) PDO index in winter - i.e. a negative PNA pattern is more likely when the PDO phase is negative, as it is at present.  The PNA index was negative every day of the month, reached its most negative extreme around Christmas, and produced the most negative December index value on record (1950-present). 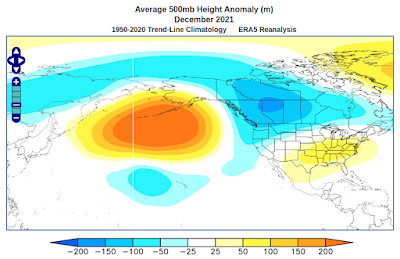 The effect of the intense and sustained North Pacific ridge was to draw up warm, moist air from the southwest and dump copious precipitation over western, northern, and interior Alaska.  NOAA climate division data and ERA5 model data agree that the month was wetter than any other December in the past 30 years over most of the state to the north or west of the Alaska Range.  But in stark contrast, it was much drier than normal along the Gulf of Alaska coastline, as the usual Gulf storminess was greatly suppressed. 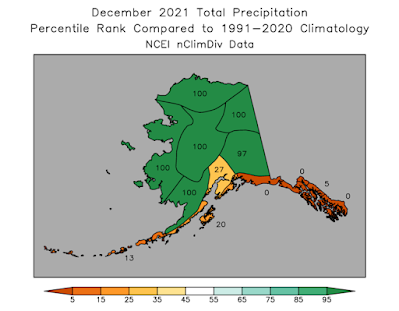 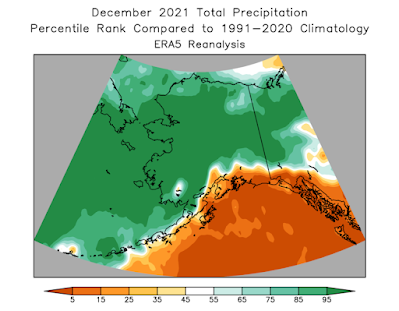 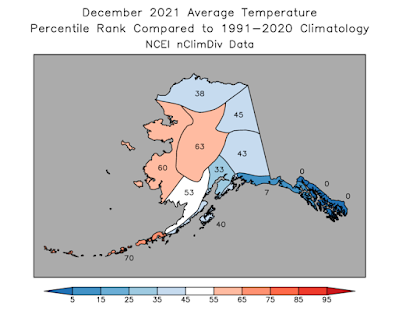 Winds were much stronger than normal over western Alaska and a good part of the interior, but well below normal along the eastern Gulf Coast. 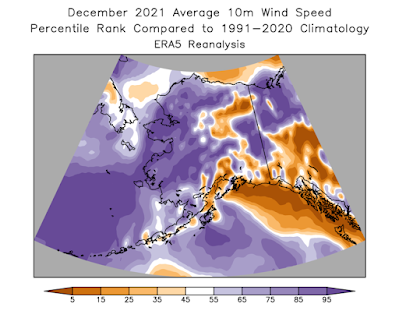 Here are a few tweets from Rick Thoman, highlighting nicely the astonishing precipitation anomalies that will long be remembered.

Here's an illustration of how unusual the December precipitation was at @DenaliNPS HQ. This shows the percent of number of months in early winter with total precipitation grouped by half inch increments. Dec 2021 really is in a class by itself. #akwx @Climatologist49 @FDNMkris pic.twitter.com/IRyavUGmP6

From ERA5 reanalysis courtesy @CopernicusECMWF, percent of December precip that fell as snow (left) vs 1991-2020 average (right). Much lower percentages than average central/western mainland, but much higher percent of total precip was snow in Southeast. #akwx @Climatologist49 pic.twitter.com/RQBOpLZRuB

December precipitation was far above normal over much of Alaska & nearby areas in the Yukon & Chukotka — dramatic contrast to the Gulf of Alaska coast/Panhandle. Patterns like this result from unusual patterns aloft, here North Pacific record high pressure. #akwx @Climatologist49 pic.twitter.com/pCY3jF0jJS

And one more to summarize: