Early Fire and May Climate Data

Last week I commented about the dampening effect of La Niña on Alaska's wildfire season, and that theory is being put to an early test only a week later.  Extremely warm and dry weather in southwestern Alaska has produced an early and aggressive start to this year's fire activity, with statewide fire acreage jumping to over 300,000 acres today.  This is more than burned in either of the last two years over the entire summer.

Rick Thoman has been posting lots of great information on Twitter, with a focus on the threatening East Fork Fire that has burned over 100,000 acres on tundra just to the northeast of the town of St Mary's on the lower Yukon.  This is remarkably far down the Yukon for a large fire, and it's easily the largest fire on record for the Yukon-Kuskokwim delta region:

The East Fork wildfire near St. Mary's Friday AM analyzed at 71,320 acres (28,862ha) by @BLM_AFS, the largest tundra #wildfire on record in the Yukon-Kuskokwim region. Next largest is the 2020 Ingakslugwat Hills fire north of Newtok at 54,099 arces (21,893ha) #akwx @oliviaebertz pic.twitter.com/TfVw94SfDU 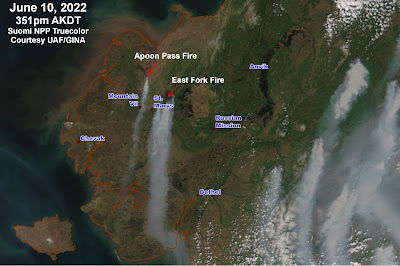 Very dry land surface conditions have developed over the past couple of months in southwestern Alaska, owing to a dry and warm spring.  April was warm and dry relative to normal, and it's worth noting (I missed it at the time) that over 10,000 acres burned in April near Kwethluk and Bethel: 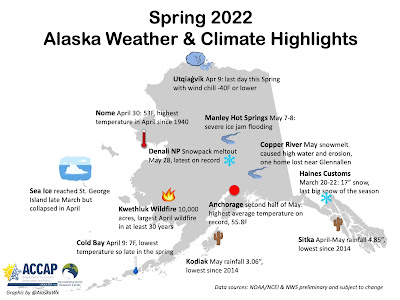 May was also very dry for southwestern Alaska; here are my usual NOAA and ERA5 precipitation rank maps: 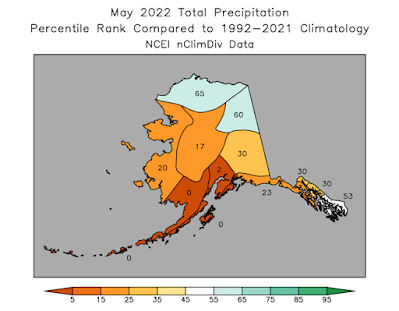 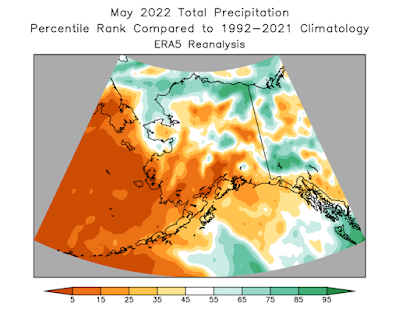 Temperatures were above normal in the Y-K Delta region and from the Bering Sea coast to Alaska's south-central region. 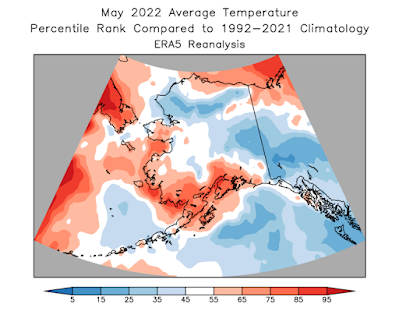 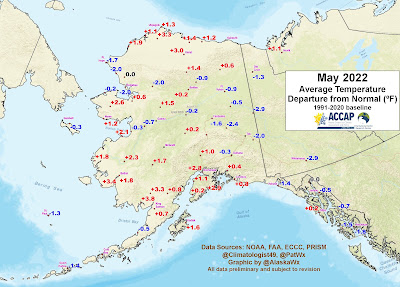 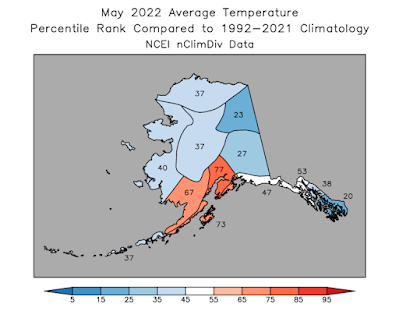 Sunshine and wind were both above normal across the southwestern mainland in May, and the dewpoint was below normal: 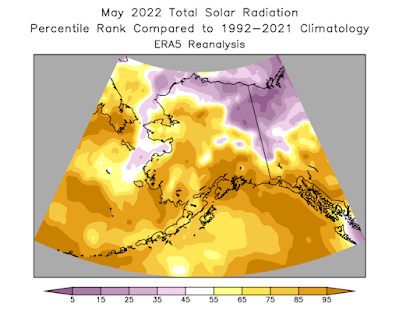 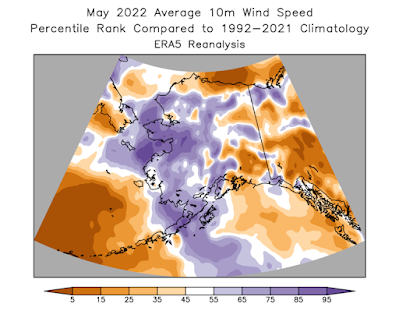 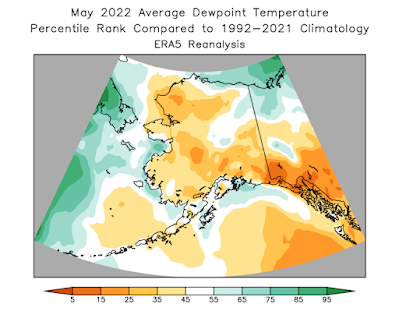 The result: the month of May had the lowest soil moisture in at least 30 years (in May) for the Y-K Delta, according to the top subsurface model level in the ERA5 data: 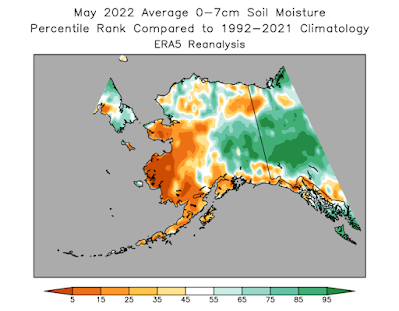 And that's before the exceptional warmth so far this month: until today, every day so far in June has been at least 73°F in Bethel.  It's easily the warmest start to the month on record, and with almost no rain to relieve the situation.

The analysts at the U.S. Drought Monitor agree that the situation is significantly abnormal over a wide area: 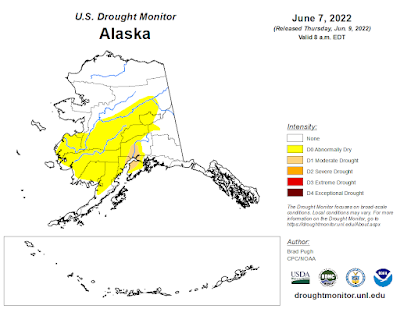 Does this portend a big fire year despite what I said in last week's post?

Not necessarily.  Of 7 other years since 1995 that had burned over 100,000 acres by this date, only 3 of 7 ended well above normal for statewide fire acreage.  The two years that were already ahead of this year (2002 and 2010) both ended up with over a million acres burned, but 2011 and 2014 both saw only minor fire activity after this date.

As for La Niña, it's interesting to note that there has been significant disruption to La Niña in the past several weeks, caused by vigorous atmospheric waves that have been traveling around the globe along the equator.  La Niña has been weakened - probably temporarily, but circulation patterns have been affected in extratropical regions, and this could explain why the weather has been more or less opposite of the typical June-July La Niña pattern for southwestern Alaska.  Let's hope we soon get back to business as usual.