First a quick comment again on northern Alaska, where winter is holding on.  Temperatures have dropped into the -20s °F widely across the North Slope the last 3 nights, and not because it's been calm; strong winds have pushed wind chills down into the -40s and even -50s in some spots.

According to airport ASOS data, Point Lay on the west coast has seen nearly continuous blizzard conditions (blowing snow, presumably) since late Tuesday morning.  Winds have been sustained at 30-40mph or greater the whole time, with a temperature between -10°F and -20°F.  Not bad for April.

But of course we're nowhere near record cold for the time of year across the region.  Daily record lows at Umiat are still in the -40s, and just last year it was -38°F on April 3.  The Umiat thermometer notched -50°F on April 5, 1986, and that stands as the latest observed -50°F in the state of Alaska.

And now for an update on sea ice, a follow-up to this post from two months ago.  Bering Sea ice has remained relatively abundant in terms of areal extent, at least compared to the recent history.  Ice extent has mostly been well above last year and it has been far above the extreme lows of a few years ago. 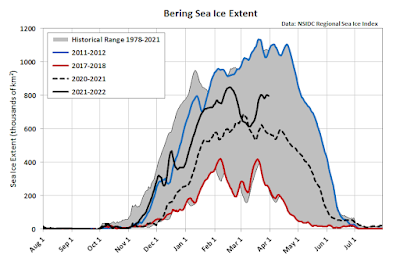 The chart below shows the strong recovery from 2018, with this year's January-March extent reaching 6% above the 1991-2020 median. 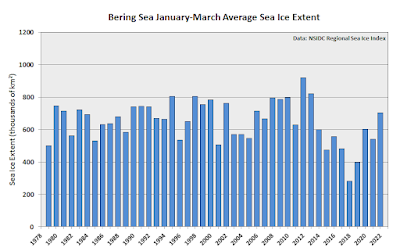 The map below shows today's analysis from the NWS.  On the plus side, full ice coverage is found as far south as Saint Paul Island, but on the flip side Norton Sound ice is already in poor shape, with a lot of open water visible on satellite (per Rick Thoman's Twitter comments). 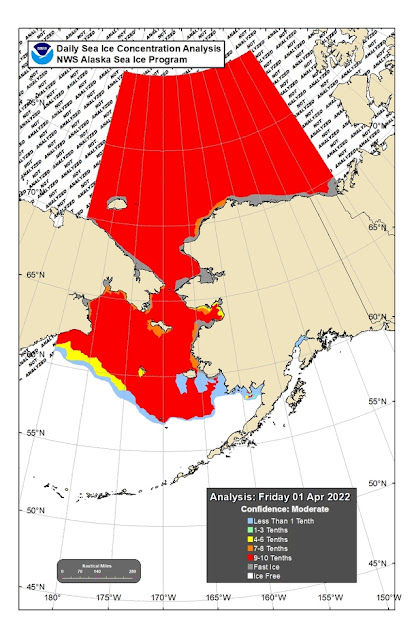 As for other seasonally ice-covered basins of the Northern Hemisphere, the major anomaly has been in the Sea of Okhotsk, where a January-March shortfall of nearly 200,000 km2 (over 20% of normal) has far exceeded the small Bering Sea surplus relative to normal.  The Greenland Sea has also been running a deficit of about the same size as the Bering Sea surplus. 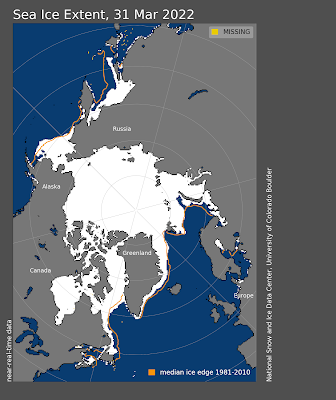