Wednesday's freezing rain in Fairbanks provided a fascinating example of how the atmosphere can sometimes produce weather phenomena that defy expectations and even bend the "rules" of atmospheric physics; so I thought it would be worth trying to explain why the event was so unusual.  After all, freezing rain was predicted to occur during the winter storm, so why is this now a surprise?

The key to understanding Wednesday's events is to recognize that precipitation can form either with or without the involvement of ice crystals.  If ice is not present in a cloud, then precipitation can form by a "warm rain" process in which cloud droplets grow by condensation from water vapor, and then the growing cloud droplets coalesce with each other through collisions and become drizzle drops (~0.1 mm in diameter) or eventually rain drops (~1 mm or greater).  This is obviously the only way rain can occur in shallow tropical clouds that are entirely above freezing.  It also explains the formation of drizzle in shallow cloud or fog layers, often observed over the ocean.  This process can also occur at temperatures below freezing, and in fact ice may be completely absent in a cloud even at temperatures well below 32 °F because the freezing process is not automatic (there is a substantial "activation energy" required); so ironically the "warm rain" process can occur at temperatures well below freezing.

The other mechanism to create precipitation involves the ice phase and occurs in mixed phase clouds. When both ice crystals and cloud water droplets are present, then the thermodynamics of the situation dictate that the ice crystals grow at the expense of the water drops, leading eventually to snow crystals that either reach the ground as snow or melt if they fall through above-freezing air either near or above the ground.  This mechanism of precipitation is by far the most common in middle and high latitudes, where ice is generally present in precipitating clouds.  Note that rain formed by this process is simply melted snow; the rain drops have passed through the solid phase.

How do we know if ice will be present in a sub-freezing cloud? This is a difficult question, but obviously makes a big difference to the outcome.  There is a general rule of thumb that I was taught: for cloud-top temperatures around -10 °C, the chance is about 50 % that the cloud is ice-free.  Warmer than that, the chance of ice is lower; colder than that, it's higher.  Note that some liquid water is generally present in clouds down to -40° or occasionally even lower.

Now we can consider yesterday's winter storm in Fairbanks.  Snow was expected in the early stages of the event, because temperatures would be entirely below freezing above the ground, and cold cloud tops would ensure ice phase precipitation.  Forecasters also saw the potential for above-freezing air to reach Fairbanks later in the event in a layer above the ground, which would melt the snow falling from above and create rain; however, with the temperature still below freezing in a shallow layer at the surface, the rain would re-freeze at the ground, i.e. "freezing rain".  Finally, colder temperatures at the end of the event would turn the precipitation back to snow.

Unexpectedly, however, freezing rain occurred along with light snow for several hours near the beginning of the event, followed by straight snow - in other words, the progression was the opposite of what was expected.  The NWS was kind enough to put up a balloon sounding at 9 a.m., during the freezing rain, and therefore we know the following (see the second chart below):

Given these two facts, it is truly remarkable that rain occurred, because standard cloud physics tells us that the snow crystals ought to have grown rapidly at the expense of liquid water droplets in the cloud, thus removing water drops and producing straight snow.  This is normally an efficient process - except for yesterday!  A possible explanation appears to be that there were simply too few ice crystals to prevent the water drops from growing by the "warm rain" process.  The few ice crystals that did form grew efficiently, forming snow, but there was plenty of water vapor left over to allow liquid drops to become large as well.  As for exactly why the ice crystal population was so sparse, that would be a worthy question for academic investigation.

Below are the balloon sounding observations from Fairbanks yesterday.  In retrospect, what should we learn from this event?  First, it's important to watch the cloud top temperatures, because cloud top temperatures of around -10 °C or warmer (e.g. 9 am and 3 pm soundings) raise the possibility that the cloud may not contain ice; in this case freezing drizzle is a distinct possibility, and as we now know, freezing rain is not impossible.  Second, it is now clear that "warm rain" and mixed phase precipitation processes can occur in tandem; just because ice is present doesn't mean that water droplets will be prevented from growing.  I don't think I'm mistaken in saying that virtually all meteorologists think of these processes as "either/or", but in Fairbanks yesterday it was undoubtedly "both/and".  For me, at least, this is a valuable lesson. 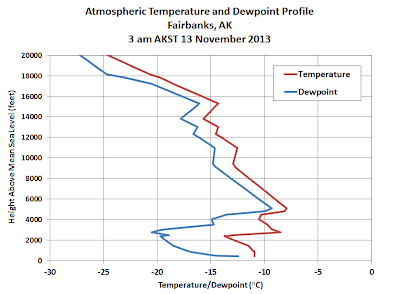 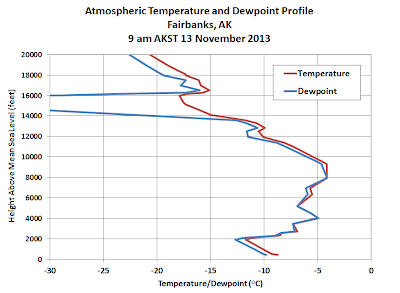 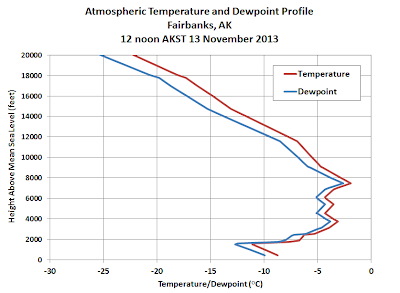 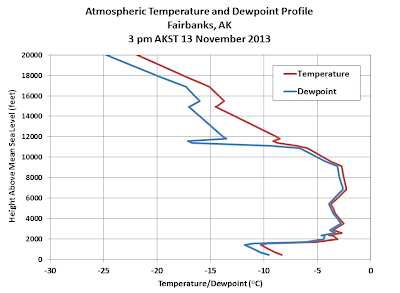