The break-up of low-level cloudiness over Fairbanks yesterday allowed lower-atmosphere temperatures to drop smartly from mid-morning on, with the result that the surface-based inversion was pronounced by early this morning (see below).

This morning's low temperature of -31 °F, which may yet be broken before midnight tonight, is slightly unusual for this early in the season; the -30° mark is reached by this date in only about one quarter of years - and less often since the 1970s.  More unusual is today's high temperature of only -22 °F; cold of this degree has occurred this early in the season in only six years since 1930.  Interestingly, some years (six of them since 1930) never produce a day this cold throughout the entire winter.

Across the border in Dawson, upriver from Eagle, today's high temperature of -41 °F was within one degree of the coldest on record for so early in the season, with historical records back to 1900 or so. 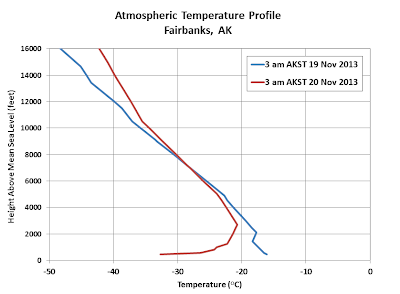