Fairbanks is entering their snowiest time of the year yet they have only received 6.0" through today. Normally they receive 18.4" by November 13th. What does this mean for the rest of the season? In the 95 years of reliable snow record keeping, only ten years had less than 6.0" through November 13th. Of those ten years, eight ended up with below average snowfall. Most of those seasons were far below normal. Figure 1 shows the correlation between the November 13th snow total and the end of season snow total and Figure 2 lists the ten season with under 6.0" through November 13th. The R-squared value for the points on Figure 1 is 0.32. Perhaps this year will mirror 1928-1929 and end up with a large snow total – but the odds are against it. The ten years shown in Figure 1 ended up with 50.5" of snow on average. The normal season total is about 65".

Unfortunately the next week or more is looking quite dry for Fairbanks. If we push our analysis out to November 20th (see Figure 3), the snow picture looks even bleaker. Only eight seasons have recorded under 6" of snow through November 20. The R-squared value for the points on Figure 3 is 0.41.

A snowy season is not out of the question, but the chances get slimmer by the day. 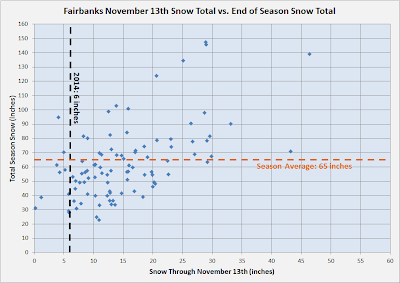 Figure 1. Scatter plot showing the season-to-date snow total through November 13th versus the end of season snow total (1920-1921 through present). 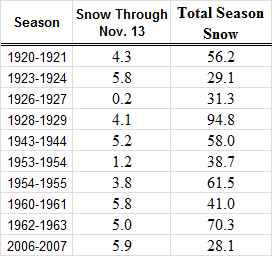 Figure 3. Scatter plot showing the season-to-date snow total through November 20th versus the end of season snow total (1920-1921 through present).