Recent computer model forecasts of a very strong storm in the Bering Sea at the end of this week have been well-publicized in the past few days.  The strong extratropical cyclone is expected to develop from the remnants of Super Typhoon Nuri, which recently had sustained winds of 155 knots (180 mph) over the western Pacific.

The computer model forecasts have shown an extraordinarily intense storm passing over the western Bering Sea and/or the western Aleutian islands on Friday.  This morning's deterministic GFS forecast for late Friday night is shown below, indicating a central minimum pressure of less than 930 mb, and the ECMWF forecast has shown a sub-920 mb central pressure.

The chart below shows the annual (cold season, July-June) minimum of the gridded sea-level pressure analysis in the 2.5x2.5 degree global reanalysis dataset, for a region centered on the Bering Sea (50-66N, 160E - 160W).  The coarse reanalysis grid misses the lowest central pressure in many storms, of course, but it seems likely that if the ex-Nuri storm pans out as expected, it will be one of the strongest storms observed in the past 65 years. The monthly distribution of minimum sea-level pressure for the same Bering Sea region is shown in the second chart, below.  The strongest storm of the winter is usually observed sometime between November and February. 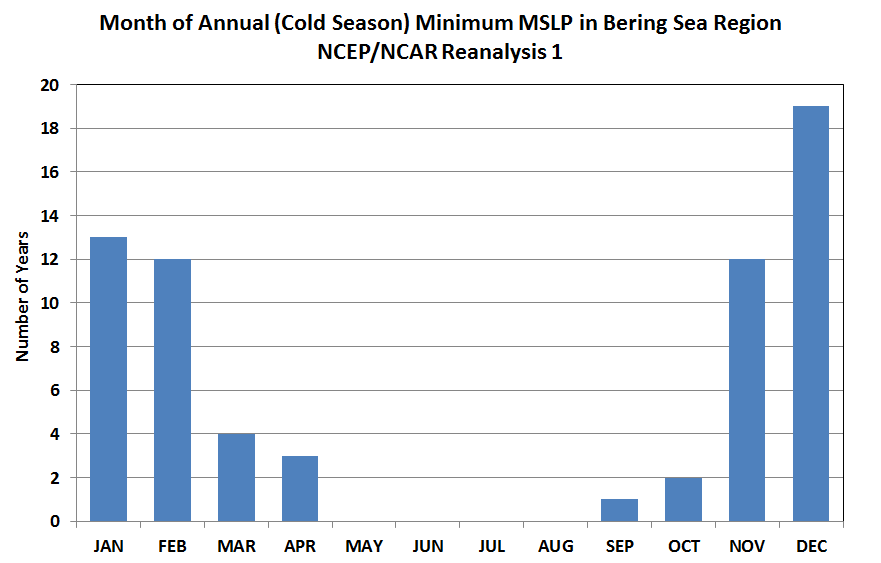