My recent post on the seasonality of the PDO's influence on Fairbanks temperatures revealed an interesting feature of the Fairbanks climate: according to historical data since 1930, late December often brings relief from the colder than normal conditions that are typically associated with a negative PDO phase.  In other words, when we look at temperatures observed in Fairbanks concurrently with a negative PDO phase, we find a notable absence of cold on or around December 21st.  This was illustrated in the following figure from the earlier post (note that I discovered a minor error in the calculation, and the new results show a slightly less pronounced peak in late December): 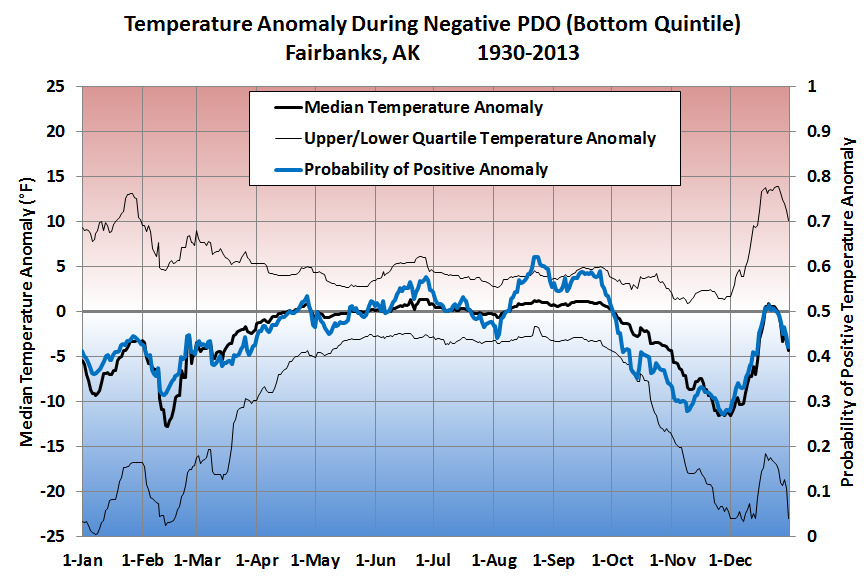 To dig into this a little deeper, I examined the evolution of the 500 mb height pattern in the years that saw a significantly negative (bottom quintile) PDO index on December 21, which is the peak of the anomalous "warmth" in the figure above.  Fortuitously, all 17 of the years occurred between 1948 and the present, which is the era of the NCEP/NCAR reanalysis data; none were found in the period 1930-1947.

The sequence of maps below shows the 500 mb height pattern at 10-day intervals for the 17 negative PDO years, from November 1 to January 30 (left to right, then top to bottom).  Blue shading indicates where the height was below normal in the majority of years, and red shading corresponds to above-normal heights.  The upper-level circulation appears to have followed a somewhat consistent sequence in these years; for example, an upper-level trough was frequently in place over Alaska on November 11.  The interesting feature in connection with the late December warmth is the ridge that develops south of Alaska in December in the majority of years; the December 21 map shows that above-normal heights tend to encompass the southwestern half of Alaska on that date.  However, the anomaly is quickly erased by the end of the year.

The temperature anomalies in Fairbanks in the 17 negative PDO years are shown in the chart below.  Note that the 17 years are the same throughout, unlike in the top figure above, where the 17 years were determined separately for each date based on the lowest PDO values for that date.  The chart below shows a much reduced cold signal in November, which I take to mean that the PDO values often change quite significantly over the course of just a month or two.  Of course, the PDO index partly reflects a response of the sea surface temperatures to recent weather conditions, so we can't think of the PDO as simply an independent forcing.  It may be, for example, that a sequence of upper-air anomalies similar to that shown above is particularly favorable for a strongly negative PDO on December 21; it's hard or impossible to extricate cause and effect, so my aim here is just to show the historical connection. 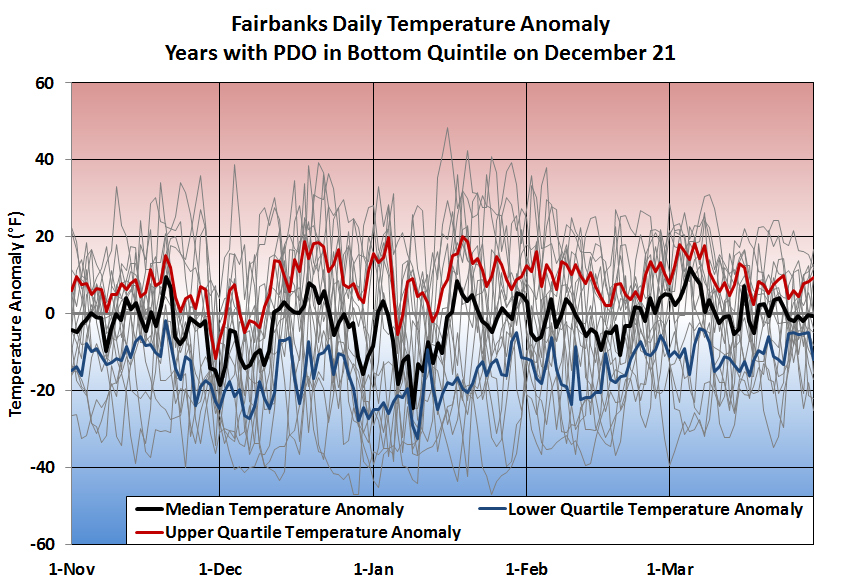 I also created a parallel set of maps showing the reanalysis temperature anomaly patterns in the (static) negative PDO years, see below.  The cold anomaly over the interior on December 1 and January 10 agrees with the Fairbanks chart above, and we see that on December 21 warmth is common over the Bering Sea.  The overall impression of the weather pattern is of volatility, with cold episodes quickly giving way to normal or even warmer than normal conditions over Alaska.  This is consistent with what we saw in the previous post, that winter temperatures are more variable during the negative PDO phase than during the positive phase.

Posted by Richard James at 6:23 AM