There are probably not many residents of interior Alaska who aren't aware that this year's fire season is on pace to exceed the record year of 2004 in terms of total acreage burned.  It still has a long way to go to get there, but the acreage burned so far is well ahead of 2004.  Here's a graphical depiction of that fact: the chart below shows the daily accumulated fire acreage for each year since 1996, based on daily reports archived at the National Interagency Coordination Center (NICC): 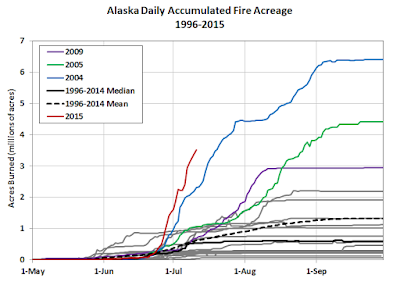 I've added the 1996-2014 median and mean year-to-date acreage as solid and dashed black lines respectively.  Obviously the total fire acreage has a very skewed distribution, as a few years are far above the long-term normal while most years have relatively insignificant fire activity.

It's interesting to note that the median acreage basically stops increasing after about July 7, whereas the mean acreage keeps rising into August and even September.  What this means is that fire activity drops to nearly zero after early July in a normal year, but in big fire years, activity continues into late summer.  In other words, some fire activity is normal in Alaska in June and early July, but by mid-July it is unusual to have significant activity; this reflects the seasonal change in weather, with increased humidity and rainfall in July usually being sufficient (under normal fuel moisture conditions) to halt fire growth and stop new fire development.

A closer look at the normal rate of burn (see below) shows that the median and mean burn rates both peak around July 8 (week ending date), and the median rate drops extremely rapidly thereafter.  However, the mean fire acreage growth drops off gradually through late summer.  Given that we are currently in an extreme fire year, we would not expect fire activity to cease suddenly now that we're past early July, but rather we should see a gradual decline whose details depend on the weather. 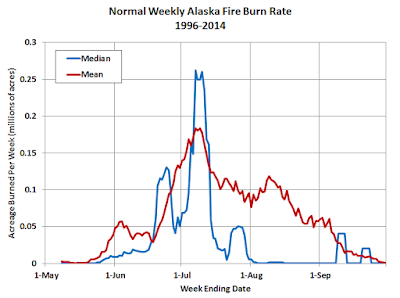 Looking at the daily fire acreage numbers, this year has the top 2 spots for daily acreage burned.  Below are the top 5 in the history since 1996 (note that I'm using the dates of the NICC reports, which lag the actual fire dates by a day or two).  According to the July 7 report, 0.15% of the state's land area burned in one day.

One more remarkable statistic: the week ending June 30 this year saw 1.85 million acres burned, which is 46% higher than the worst week in 2004.  It's hard to overstate how extreme the situation has been.