In pondering this year's record-setting fire season in Alaska (up to 4.4 million acres burned as of yesterday), I found myself wondering "just how dry and warm has it been?"  The extreme fire behavior suggests that the accumulated climate anomalies over the past several months must have been equally extreme, so it's of interest to see if the data reflect this. 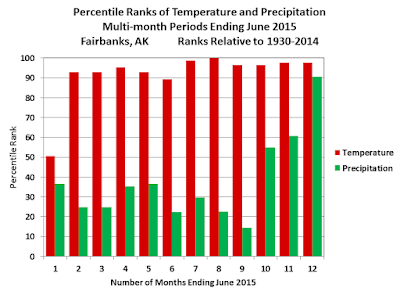 As we include more months in the average, going farther back into spring and winter, the temperature ranks generally keep growing and the precipitation ranks keep dropping, until we find that the most recent October-June period (9 months ending in June) was ranked 96% for temperature and only 14% for precipitation.  Going even farther back, however, we see the effects of last year's very wet summer in Fairbanks, which raises the precipitation ranks as we include those months.

Now take a look at the chart below for McGrath.  All running averages from 1-12 months are above the 94th percentile for temperature (with several being records), and periods from 4-12 months are below the 10th percentile for precipitation.  In other words, it has been both extremely warm AND extremely dry in McGrath over seasonal timescales leading up to this summer.  In view of these numbers, the extreme fire season is anything but a surprise. 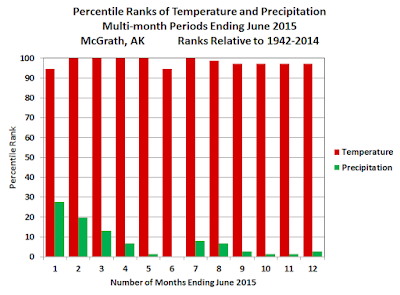 The figures below show another way of looking at this year's temperature and precipitation within the historical distribution, for a specific combination of averaging periods (6 months for precipitation, 3 months for temperature).  I picked this combination because McGrath had the driest January-June period on record and the warmest April-June period.  I've also colored the years that had strong El Niño or La Niña conditions in April through June, just to see how strong the El Niño connection is.  It seems that recent warmth is consistent with the El Niño influence in both Fairbanks and McGrath, and there's a slight tilt towards drier conditions in Fairbanks during strong El Niño conditions (as we noted here).  However, La Niña does not necessarily bring the opposite anomalies, as some of the strongest La Niña years were also very dry in Fairbanks in late spring. 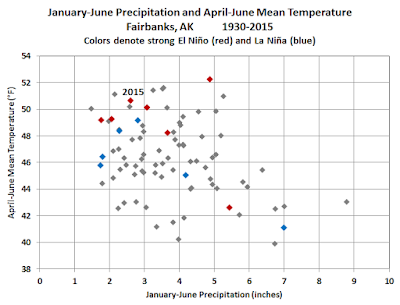 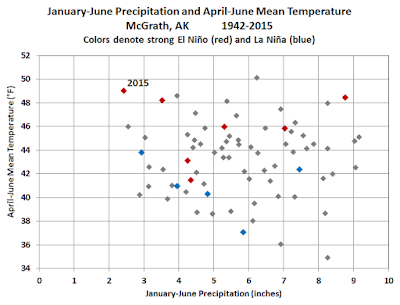 Here's a graphical depiction of this year's record year-to-date precipitation deficit in McGrath.  The moisture situation has improved slightly in the past couple of weeks, but we're still at the driest year-to-date on record. 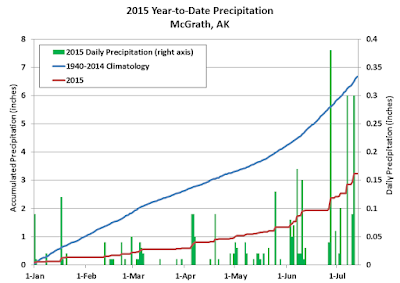