It's been almost three months since I discussed the strengthening El Niño episode in the tropical Pacific Ocean, so it's time for an update.  There have been no big surprises, as El Niño has continued to strengthen, and sea surface temperatures have reached levels characteristic of classical "strong" El Niño events, i.e. at least 1.5 °C above normal in the Niño 3.4 region.  See here for NOAA's weekly technical discussion, with lots of graphics.  Here's a recent SST anomaly map showing the El Niño anomaly in the eastern tropical Pacific and of course ongoing warmth in the eastern North Pacific. 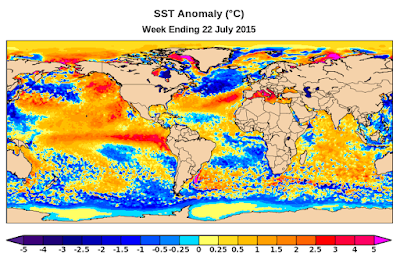 The long-range computer model forecasts expect that El Niño will continue to strengthen, and indeed they foresee an acceleration to very intense levels in the relatively near future: see below for an example.  However, it is interesting to observe that earlier forecasts (e.g. from May, see below) were expecting El Niño to be already considerably stronger than it is now, so the evolution is lagging what was expected.  To my mind this is a hint that the episode may peak at lower intensity than is currently predicted and it may be "merely" a strong El Niño rather than a super or record-strength El Niño.

Another interesting aspect of this year's ENSO (El Niño - Southern Oscillation) behavior is that it's rare to have moderate or strong El Niño conditions in two consecutive winters.  The scatter chart below compares ENSO index values for consecutive years in the October-December season.  The top highlighted rectangle draws attention to the top 10 El Niño events since 1900, and we see that the prior year ENSO index was always between about -0.8 and +0.7.  Last year's October-December ENSO index was +0.92, so we'll fall outside the top rectangle this year unless El Niño suddenly weakens. 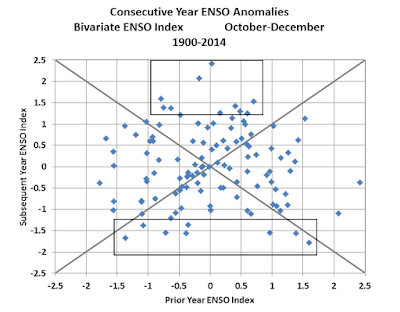 Looking at the bottom rectangle, we see that the strongest La Niña events tend to follow either a significant (but weaker) La Niña event or a moderate to strong El Niño in the previous year.  These features of the chart may seem like only sampling variability, but it is generally accepted that La Niña episodes tend to be longer lived than El Niño events.  In 115 years of data plotted here, only twice was the ENSO index above +0.75 in two consecutive years, whereas on 8 occasions it was below -0.75 in two consecutive years.

Email ThisBlogThis!Share to TwitterShare to FacebookShare to Pinterest
Labels: ENSO