With a little snow now on the ground and nights continuing to lengthen rapidly, temperatures have dropped sharply under clear skies in the past few nights.  Last night was the coldest yet, with temperatures below -15°F in quite a number of locations in the eastern interior.  Here are a few of the coldest measurements so far:

The coldest spot around Fairbanks seems to have been the sensor near Smith Lake on UAF's North Campus, which reached -13°F yesterday and -12°F today.  Fairbanks airport dropped below 0°F for the first time yesterday; this is just slightly earlier than normal.

The cold is not particularly unusual for the time of year, but the persistence of clear skies this month certainly is very unusual.  In just the past 2 weeks, Fairbanks has seen sunny and very warm weather (55°F on the 12th), sunny and windy weather, and now sunny and calm, cold weather.  The absence of cloud is remarkable, because this is normally one of the cloudiest times of year in Fairbanks (only early August is comparable).  Including today, 19 of 24 days so far in October have had less than 50% cloud cover on average, and this is easily a record for the entire month - the previous highest total was 10 of 31 days in 2009 (based on ASOS data since 1998). 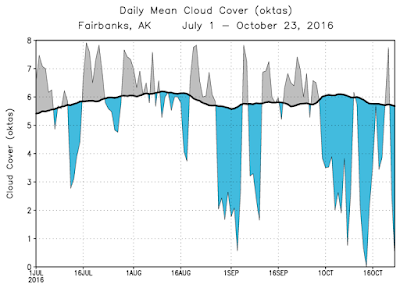 The reason for the clear skies is plain to see in a reanalysis estimate of 500mb heights so far this month: an axis of high pressure has extended from the northeastern Pacific to northwestern Alaska and the Chukchi Sea.

Compared to normal, upper-level pressure has been well above normal to the northwest, and so the usual westerly flow across interior Alaska has been blocked.  Obviously this also explains the lack of precipitation; the light snowfall last week produced a mere 0.02" of liquid equivalent precipitation - the month's only precipitation.  The driest October on record in Fairbanks was 1954, with 0.08".

Here's the October 1-22 average relative humidity at 850mb, according to the NCEP/NCAR reanalysis: there's a large zone of sub-45% values across the interior.

The departure from normal shows where the dry conditions aloft have been most unusual: