It's been quite a while since interior Alaska has seen persistently cold conditions during winter, so the current lengthening cold spell is a notable change of scene.  Including today, Fairbanks has been colder than normal for 17 of the last 18 days.  Here's an update to my chart showing the daily statewide minimum temperature; this is based on 24-hour minimum temperature reports ending at various times of day, so the daily measurement windows are not the same everywhere, but the trend is clear: the colder spots in Alaska have produced -40s for more than a week now. 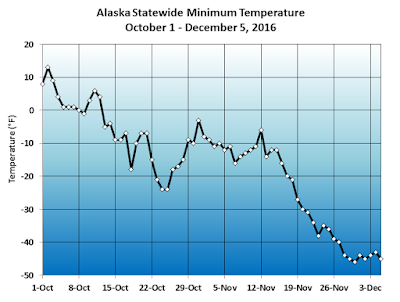 The coldest area last week was the north-central interior, with the Norutak Lake RAWS reaching -40° or colder for 8 consecutive days ending yesterday.  The coldest conditions have now shifted to the northeast, with the Chalkyitsik RAWS sitting at -48°F this evening and apparently on track to break -50°F tonight.  Last winter no station in Alaska quite reached -50°F, although the Kanuti Lake RAWS got very close.

Environment Canada's surface chart from yesterday afternoon showed strong high pressure over northeastern Alaska, and the Fairbanks sounding measured a cold column with 850mb temperatures well below -20°C.  However, strong warming has been occurring aloft in the past 24 hours as the high pressure produces subsidence; note the difference between the two soundings below (3pm yesterday and 3pm today). 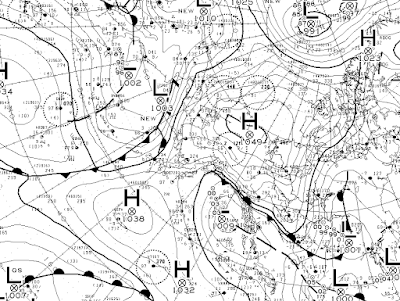 The 1.5-meter temperature measurements from UAF's Poker Flat Research Range show the warm-up nicely; this morning the temperature jumped from -28°F to -7°F in only half an hour.  The Poker Flat site is located near Chatanika on the Steese Highway north of Fairbanks at an elevation of about 700 feet above sea level.