I've been busy lately, but here are a few miscellaneous items that may or may not interest a few readers.  First - the webcam from Dawson, Yukon, is still showing a rather considerable amount of open water on the Yukon River more than two months after ice began forming.  This is despite daily mean temperatures in the -30s Fahrenheit for a week earlier this month.  The incomplete freeze-up could reflect warmer than normal temperatures back in November, although it's not necessarily that unusual to see open leads on northern rivers even in the depths of winter.  Those more familiar with the Yukon River at Dawson would be able to say how unusual this particular situation is.  [Update: this article gives some perspective: http://www.cbc.ca/news/canada/north/dawson-city-freeze-up-late-1.3871343] 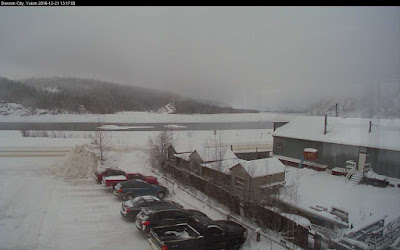 The Tanana River at Nenana finally froze over completely in the past week or so, according to webcam views.  The first image below, from December 15, shows the last vestiges of the central channel that was last to freeze over.  Yesterday's image (second below) showed a more satisfactory scene. 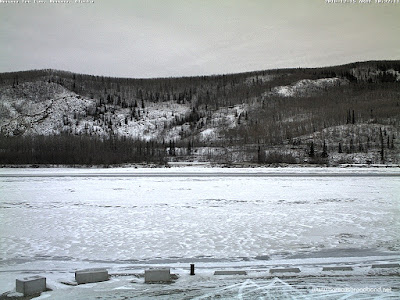 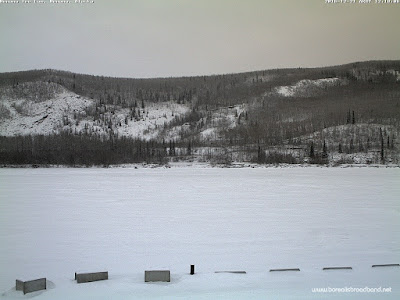 On another note, I've recently figured out how to decode the land surface temperature estimates from the Suomi NPP satellite.  This satellite orbits the earth about 14 times each day and measures (among other things) emitted infrared radiation, leading to an estimate of surface temperatures when clouds are absent.  The data are available at a resolution of 750m, which allows for some really nice spatial detail.

I thought it would be interesting to examine the minimum surface temperature estimates from the recent cold spell, so I extracted the lowest value produced by the various scans available each day from December 6-10; see below for maps.  Note that there are some obvious artifacts in the data (e.g. on the 10th), and there is missing data in some areas owing to cloud and fog (including probably ice fog in the coldest locations); but overall the data look quite good.  The very coldest temperatures on these days (for this map domain) were found over the Old Crow Flats of northern Yukon. 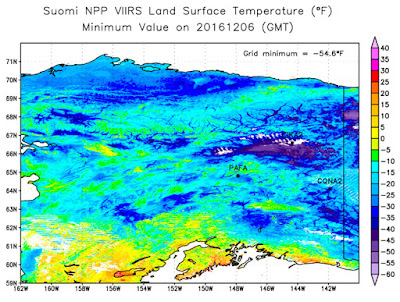 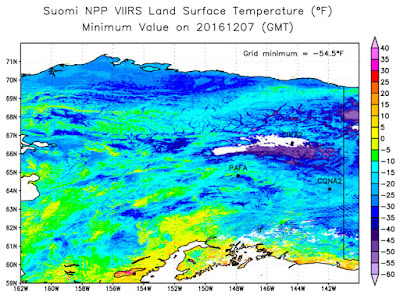 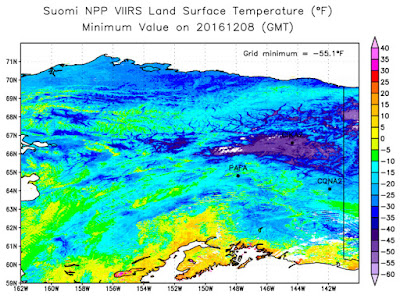 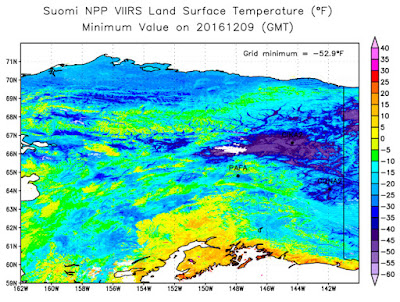 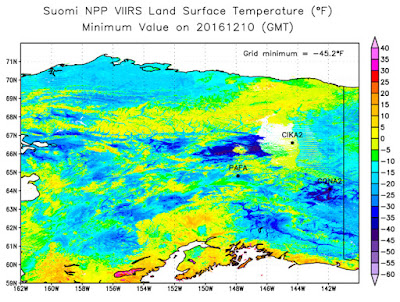 For comparison, the observed daily minimum temperatures at the 3 locations marked on the maps were as follows (Fairbanks, Chalkyitsik RAWS, and Chicken respectively).  A detailed long-term investigation of the quality of the satellite estimates over Alaska would be most interesting.


Finally, the FAA webcam at Ambler yesterday provided an opportunity to see the brief sunrise that occurs on the winter solstice even above the Arctic Circle (owing to atmospheric refraction).  Ambler is about 35 miles north of the Arctic Circle but still experiences over an hour of full daylight even on the shortest day of the year.  One has to go about 20 miles farther north to have no sunrise on December 21.